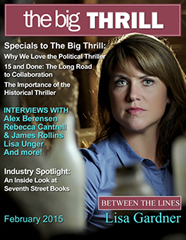 Read the stories that were featured in the February edition of The Big Thrill.

February is all about affairs of the heart—but it wouldn’t be The Big Thrill without a side of murder and mayhem.

We kick off the month with a Between the Lines interview featuring New York Times bestselling author Lisa Gardner, who dishes on everything from cooking and marketing to her new release, CRASH & BURN.

Industry Spotlight returns with James Ziskin shining the light on Seventh Street Books, the new thriller and mystery imprint on the block with an already remarkable track record of success.

International Thrills correspondent J. F. Penn is back with a look at the life of bestselling Australian-British author Alan Baxter, and on the Africa Scene, Joanne Hichens profiles Cape Town’s Priscilla Holmes.

Plus, we have not one, not two, but three Specials to The Big Thrill this month. Steve Vincent explores why we love the political thriller. Jan Thomas and Grant Jerkins give us the scoop on the art of collaboration. And Jerry Amernic talks about the importance of the historical thriller.

As if that isn’t enough to fall in love with this issue, we’ve got interviews with more than twenty authors—all International Thriller Writers members—about their heart-pounding new releases.

Here’s what’s in store for February!

February 2 – 8: Do authors sometimes regret killing off a character?
February 9 – 15: ITW Member Brian C. Poole says:  “At heart all storytellers are liars.”  How do our stories lie?
February 16 – 22: Could you write or revise your novel if word processors were not available – or do you?
February 23 – March 1: The first time you discovered thrillers as a genre … do you remember which book it was, and how it landed in your hands?

Congratulations to Jeff Spangler, the winner of this month’s BIG THRILL giveaway. Jeff will receive an assortment of signed thrillers including Aftershock by Philip Donlay, The Accidental Alchemist by Gigi Pandian, Buried by Elizabeth Goddard, Viking Bay by M. A. Lawson, South of Good by Randall Reneau, Unseen Forces by Ed Kovacs, Storm Damage by Ed Kovacs, Good Junk by Ed Kovacs, Paw and Order by Diane Kelly, In the Woods by Merry Jones, The Replacements by David Putnam and The Fourth Rule by Douglass Seaver.