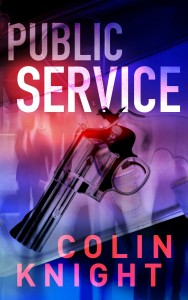 Not many jobs are for life.

Jeff Parsons was angry, angry enough to kill. A reliable, dependable, and mostly honest public servant, Jeff expected to ride the government gravy train undisturbed until his retirement in 2025. On Friday March 2, 2012, Jeff’s train derailed; a confidential email revealed that Jeff’s boss, under the guise of government-wide cut backs, planned to ‘let Jeff go’ so they could use the savings to reward and promote their sycophant lackeys and painted whore. Unemployment at fifty would destroy Jeff‘s life and threaten the security and health of his children. That was not acceptable.

Desperate and determined, Jeff analysed the problem; six deaths in seven days ought to be enough.

All he needed was a killer.

PUBLIC SERVICE is available from Amazon, Amazon CA and Smashwords.

Colin Knight was born in Manchester, England to working class parents – his father painted houses and drove delivery trucks; his mother worked in a retirement home. He and his four siblings shared a small three-bedroom house on an unremarkable city owned housing estate ten miles from the city centre. From seven to sixteen years old, he held newspaper and milk delivery jobs, which he did, before school.

Educated to state standards, at an experimental public high-school for boys, Colin graduated at sixteen with minimum credentials. At eighteen, he joined an American international company as a general office helper. By twenty-three Colin had developed an aptitude for product management and marketing. His career with the American company provided work assignments in Italy and Switzerland, as well as travel to many European countries.

In 1987, Colin immigrated to Canada to work for a distributor of the American company. In 1991, he took a chance and quit work to attend university. By 1997, Colin had obtained a BA Honors Degree in Political Science, and a MA Degree in International Relations.

In 1999, after a brief return to the private sector, Colin joined the Canadian Federal Government. During his fifteen-year government career, Colin worked for the Department of Foreign Affairs, the Canadian International Development Agency, the Public Safety Department, the Royal Canadian Mounted Police, and most recently, he was a Senior Policy Analyst in the Federal Privy Council Office. Government work and assignments took Colin to Europe, Asia, Latin America and the US. Colin retired from the government in 2014 to focus on family, writing and life.

Colin lives in Ottawa, Canada with his wife, Barb, and their three children, Tessa, Duncan and James. In between housework, groceries, shuttling children and general family support, Colin is working on his next novel. Squash, soccer, learning to play the guitar, and quality beer relieve stress and writers block.