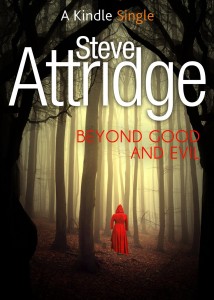 Armed with a quick, inquisitive mind, an arsenal of philosophic quotations and an addiction to fear, Paul Rook is willing to embroil himself in any sticky situation which comes his way. Rook’s latest job is for Andy Hebden, who hires him to find his brother Marty. Marty had been selling Warhol prints and, after going to meet a client, Jacques Brissot, he disappeared, along with the paintings and half a million in cash.

But before Rook can find Marty, Andy turns up dead. Brissot proves almost impossible to track down, and before he knows it, Rook has become the target of one of Brissot’s men… Can Rook find Marty before the killers find him?

Or will this philosophical investigation be his last…?

BEYOND GOOD AND EVIL is available from Amazon and Amazon UK.

I downloaded this as I wanted a reliable good read…and I wasn’t disappointed…romped through it enjoying every minute. The main character is loveable and all the others are so vividly painted that I feel, after having finished it last night, that I’ve seen them all in a fast paced thriller.
But it’s not a run of the mill detective novel. Steve’s writing has a depth that matches the philosophical bent of his protagonist. Have now downloaded all the others and am content in the knowledge that I have a few nights of entertaining reading ahead of me.

Steve Attridge is an award-winning screen writer and novelist. His television dramas include Hawkins and The Boot Street Band and his other books include ‘Waking Dreams’, ‘Behind Closed Doors’, and ‘Bottom of the List’. He has won RTS Awards and Writers Guild and BAFTA awards.