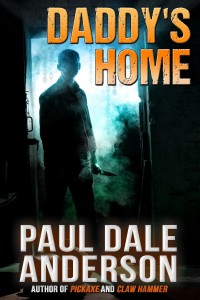 Terror gripped the streets of Willow Woods as the grisly deaths increased. The killer struck in isolated areas, slashing young women into bloody ribbons of flesh with the precision of a surgeon. The experts knew he used a razor-sharp butcher’s knife, but only the dead knew his face….

The bad dreams started when Danny’s real dad disappeared. Weird, scary dreams about a strange man with a long, shiny knife, standing over Danny’s mother covered in blood on their kitchen floor. His mom told him to forget about the dreams and stop watching the TV news reports about the Mad Slasher. She said they were safe, especially with their new friend Michael, his pretend daddy, to protect them.

But Danny was afraid of Michael.

Michael looked too much like the monster in his dreams….

DADDY’S HOME is available from Amazon, Barnes & Noble and Smashwords.