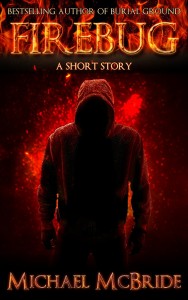 When Amelia Behrent is murdered, her sister—FBI Special Agent Emma Behrent—discovers her death is only the most recent in a series of killings spanning the American Southwest. Someone is hunting young women and setting fires to cover his tracks. All Special Agent Behrent has to go on is his unique signature as an arsonist and the fact that each of his victims had a dead firefly in her mouth. She must discover the killer’s next victim if she hopes to stop a monster who wants nothing more than to watch the entire world burn.

FIREBUG is available from Amazon.

Michael McBride is the bestselling author of Ancient Enemy, Bloodletting, Burial Ground, Condemned, Fearful Symmetry, Innocents Lost, Sunblind, The Coyote, and Vector Borne. His novella Snowblind won the 2012 DarkFuse Readers Choice Award and received honorable mention in The Best Horror of the Year. He lives in Avalanche Territory with his wife and kids.

To explore the author’s other works, please visit www.michaelmcbride.net.