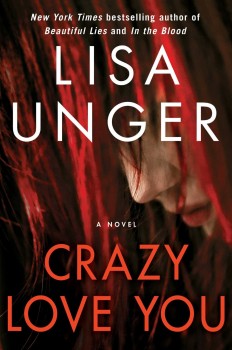 New York Times bestselling author Lisa Unger can usually pinpoint the exact moment, or germ for a novel. There’s a little zap, generally sparked by a poem, a slice of music, a news story, or in one instance, a piece of junk mail.

But in the case of her newest release, CRAZY LOVE YOU, Unger says she just woke up one day with an edgy, unstable voice in her head.

“I knew it wasn’t my voice because it was male, and he was a graphic novelist—a world I knew nothing about,” she says. “So I called up my friend Gregg Hurwitz, who has also written for graphic novels, and said, ‘Help! I don’t know anything about my character’s job.’”

Desperate to move on from the deadly family secrets he’s shared only with his best friend, Priss, Ian meets sweet, beautiful Megan, whose love inspires him to be a better man. But Priss doesn’t like change. Change makes her angry. And when Priss is angry, bad things happen.

“At its core, CRAZY LOVE YOU is about obsessive love, the twisting nature of reality and fiction, and going down the rabbit hole of addiction,” she says.

It is perhaps one of Unger’s darkest stories, which is saying a lot since it marks her thirteenth published novel. Not surprisingly, several of her thrillers have made the New York Times bestseller list. With more than 1.8 million copies of her books sold worldwide, Unger is well known by her fans to produce stories that deliver a gripping plot and deeply complex characters.

Characterization is important to Unger not only in what she writes, but also in what she reads and watches on television. A self-proclaimed Game of Thrones geek, and avid fan of shows like Homeland, Orphan Black, and True Detective, Unger says in terms of well-developed characters, there’s a lot to choose from these days.

“Don Draper from Mad Men is brilliantly layered and delicately revealed,” she says. “Carrie Mathison from Homeland is also fascinating and flawed and vulnerable. She manages to be powerful, unstable, and engaging, even when she’s really upsetting. True Detective is a great example of how a novelist’s sensibilities make for top-notch programming—the dialogue and character development there are as good as anything I’ve seen on the screen, small or large.”

And while Unger uses the television as a way to relax her overactive frontal lobe, she says today’s quality shows can be as inspirational to novelists as novelists have clearly been to television programming.

“Storytelling in any form will influence the storyteller’s ideas about character, dialogue, plot, and pacing,” she says. “We are all students and teachers of each other.”

That continued learning is critical because while the industry continues to change and evolve, Unger says the way she writes—most days in her office at a computer (though the floor will do in a pinch)—hasn’t changed, nor has her advice for those just getting started in the business.

“Write. Dig deep. Write more. Write every day. Get better,” she says. “Read the work of people you admire. If you are talented and you work hard, you will find your path, so be true to your voice, the other voices in your head, and the story in your heart.”

For Unger, writing has always played an important role in her heart—as a kid in school, working a full-time job, commuting, as a parent. There may be no romance, no ritual, to her process, but it is part of her life balance, a formula that admittedly requires constant tweaking and adjusting.

“I am a huge fan of Anne Lamott, and she suggests a course of ‘radical self care’ whenever things get off kilter,” Unger says. “Sometimes those things are as easy as closing the door to my office, or drinking a really big glass of water.”

And other times, it means stepping away altogether and cooking with her husband, the newly-crowned barbecue king. Together, they’ve come up with a host of signature dishes, including a fabulous jerk chicken, homemade Jamaican beef patties, and a mean marinara.

“We especially love to cook for our friends and family,” she says. “And we are definitely not afraid to experiment.”

With CRAZY LOVE YOU out in the wild, Unger is now working on her 2016 release, and experimenting with a young adult novel she’s teased us with for more than a year—but isn’t quite ready to talk about. 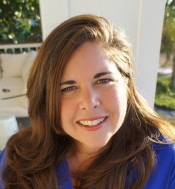