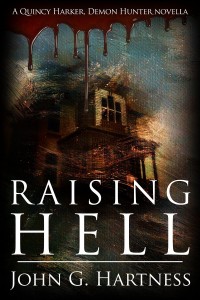 Straight out of the pages of the legendary vampire novel Dracula comes a demon hunter for the modern world. Mina Murray and Jonathan Harker had a son. They named him Quincy. His guardian angel calls him Q. Dracula calls him nephew.

Demons call him The Reaper.

“There are things in this world that men and women aren’t meant to understand. We aren’t supposed to know these things exist, much less how to fight them. The things that go bump in the night, the monsters in the closet, the shadow out of the corner of your eye — that’s where I live.”

This exciting new series from the author of The Black Knight Chronicles and the Bubba the Monster Hunter short stories is a walk through the dark side, where things go bump in the night, and somebody has to bump back. Quincy Harker is that somebody.

RAISING HELL is available from Amazon.

John G. Hartness is a teller of tales, a righter of wrong, defender of ladies’ virtues, and some people call him Maurice, for he speaks of the pompatus of love. He is also the author of The Black Knight Chronicles from Bell Bridge Books, a comedic urban fantasy series that answers the eternal question “Why aren’t there more fat vampires?” He is also the creator of the comic horror Bubba the Monster Hunter series, and the creator and co-editor of the Big Bad series of horror anthologies from Dark Oak Press and Media. 2015 has seen John launch a new dark fantasy series featuring Quncy Harker, Demon Hunter. In his copious free time John enjoys long walks on the beach, rescuing kittens from trees and recording new episodes of his ridiculous podcast Literate Liquors, where he pairs book reviews and alcoholic drinks in new and ludicrous ways. John is also a contributor to the Magical Words group blog. An avid Magic: the Gathering player, John is strong in his nerd-fu and has sometimes been referred to as “the Kevin Smith of Charlotte, NC.” And not just for his girth.