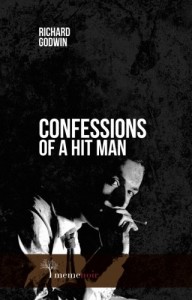 Confessions of a Hit Man is a high octane thriller with a plot that adds velocity like a well-oiled chicane. When ex-Royal Marine Jack becomes a paid assassin, work comes easily, especially when working for the Sicilian Mafia, until he gets drawn into a government plot selling enriched plutonium to a rogue Nation.

A very very good mystery is hard to write about with using spoilers. This one is so tightly written that one episode leads naturally to another, and the finale is blistering indeed—in this case, it is the protagonist’s soul that is blistered, although life is not done with him yet. And something else is blistered: the “top of the tree,” as the hit man, Jack, put it. The national and multinational networks, the CIAs and MI5s, the Irguns, and the KGBs. Not all of these are specifically involved in the story, but this kind of organization, its deceptions and the money it siphons off from the people, is delineated in all its power. Richard Godwin shows why it is not only an organization, but has become a tradition. And an obsession,its paranoia mirroring out own. Interesting word, mirror.
Richard Godwin is known for the various genres he combines in his work: mystery, horror, espionage, exotic adventure, erotica, and satire. Most of these can be subsumed by the epithet “pulp,” used in the sense it can be used of Jim Thompson, Charles Bukowski, James M Cain, Gerald Kersh, or Jean-Patrick Manchette. All of them are present here, even satire, in this case of spy novels of course. It makes you see these _Confessions_ uncanny and off-centered. That forces the reader to look further into what kind of story s/he is reading. For example, one victim dies while singing “My Way” in the shower.

From the first, Jack, with his Royal Marine training, is brilliant at his job of tracking, approaching, ingratiating himself with, and finally killing his targets. He also acquires a double, a shadow self, which escapes from his mirror and becomes him. That in itself is a fascinating literary device. With each new adventure, “the line of barbed wire stretched its way round my life like a shadow.” Beyond the way it works with Jack and his story, think about—I am sure Godwin has—all the historians and politicians who have stated that a national hero was worthy of immortality because he had no choice but to do what he did to save his country. Jack never takes refuge in that ready-made. These are confessions—honest ones, thus a bit harrowing to read, given what the hits are like. But that is as nothing compared to the way the author presents you with the identity of a 21st century assassin.

Along the way, we find Jack eliminating various very wealthy and apparently secure people: a politician who steals from his constituency; a child-abusing priest, a funeral director who has hideous uses for his corpses, a company of arms dealers selling nuclear materials to needy countries. You can hardly read this without rooting for Jack. Or is Jack’s double, that absorbs him so completely that he stops talking about his double?
Throughout the novel, Jack (he hides his name even from his girlfriend) takes orders from a shadowy figure, immaculately dressed, smooth spoken, a kind of autodidact, with a bottomless pit of money. This man stands beyond the sociopathic billionaires, elected officials, arms dealers, the Deep State itself, and behind Jack (who stops talking about his double halfway through the book) . Who is this guy? Who is Jack?

Jack is an assassin. No last name, because last names make it easier for the wrong people to find you. And almost everyone is the wrong person when you kill for a living. “I am faceless. Assumed names are all I need. I don’t know if anyone’s still alive who would know my real one.”

One job leads to the next, as the assassin’s reputation grows, along with the size of the fee he is able to command. The only thing the targets have in common is their slimy distastefulness. And the fact that they all wind up dead.

Eventually, Jack’s contact, a man named Luca Martoni, offers him the contract that will make his career, the one he can cash in on and then retire. If he survives.

The problem is that government corruption is involved, and the rot runs deep below the surface of this particular job. Soon Jack is ensnared in a web of lies and deception that runs to the very highest levels of government. Jack is left with two choices: turn the tables on the bloodthirsty killers now on his tail, or end up like so many of his targets, face down in a pool of blood.

Richard Godwin has written a noir masterpiece, dark and brutal, with an in-your-face style that fits perfectly with the first-person narration. CONFESSIONS OF A HIT MAN starts out fast and never lets up. It’s a .22 slug rattling around in the brain of the reader.

If you love noir fiction distilled down to its purest form, this is the book for you. Check it out, but make sure you have plenty of time to read, because you won’t want to put it down.

CONFESSIONS OF A HIT MAN is available from Amazon and Amazon UK.

Richard Godwin was born in London and obtained a BA and MA in English and American Literature from King’s College London, where he also lectured. He is the author of critically acclaimed novels Apostle Rising, Mr. Glamour, One Lost Summer, Noir City, Meaningful Conversations and Confessions Of A Hit Man. He is also a published poet and a produced playwright. His stories have been published in numerous paying magazines and over 34 anthologies, among them The Mammoth Book Of Best British Crime and The Mammoth Book Of Best British Mystery, alongside Lee Child, published by Constable & Robinson, as well as the anthology of his stories, Piquant: Tales Of The Mustard Man, published by Pulp Metal Fiction in February 2012.