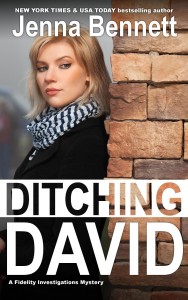 When Gina Beaufort Kelly’s husband leaves her for a woman young enough to be his daughter, Gina doesn’t get mad… she gets even.

Or at least she tries to, by targeting David’s assets in the divorce. She spent eighteen years of her life with him; it’s only fair that he should compensate her accordingly.

However, David doesn’t agree, and when he ends up dead, on the evening before they were set to go before the judge, the police suspect foul play—and suspect that Gina’s behind it.

Now this jilted wife must figure out who else wanted her soon-to-be-ex-husband dead—and why—before she loses everything, including her freedom.

DITCHING DAVID is available from Amazon, Barnes & Noble and iTunes.

New York Times and USA Today bestselling author Jenna Bennett (Jennie Bentley) writes the Do It Yourself home renovation mysteries for Berkley Prime Crime and the Savannah Martin real estate mysteries for her own gratification. She also writes a variety of romance for a change of pace. She’s been a member of the International Thriller Writers since 2007 and was a 2008 ITW Debut Author.

Confessions Of A Hit Man by Richard Godwin