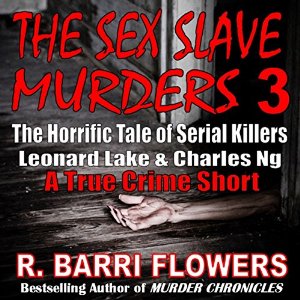 Leonard Lake and Charles Ng left their dark mark on society as two of America’s worst and most appalling serial killers. Between 1984 and 1985, the unlikely homicidal pair perpetrated their sex-motivated crimes at a secluded cabin and adjacent custom-made bunker of horrors in an unincorporated area in Calaveras County, California, where they brought their abducted victims, sexually assaulted, tortured, and murdered them, often videotaping their heinous crimes for their sick pleasure. In all, the two serial slayers are thought to have killed between twelve and twenty-five people. Only a twist of fate brought their reign of terror to a shocking conclusion. The entire sordid tale unfolds in this absorbing short.

THE SEX SLAVE MURDERS 3 is available from Amazon, Audible and iTunes.

“A model of exposition not to be missed by anyone interested in the annals of American criminal behavior.” — Jim Ingraham, Ph.D., professor emeritus of American Studies at Bryant University on THE PICKAXE KILLERS

“Exhaustively researched, each storyteller brings their own unique prose to these pages, creating what will soon become a true crime classic.” — Kevin M. Sullivan, true crime author on MASTERS OF TUE CRIME

“This book should be a mandatory purchase and read for any true-crime buff.” — Steven A. Egger, PhD, associate professor on MASTERS OF TRUE CRIME

“An indispensable sourcebook for anyone interested in American homicide, from law-enforcement professionals to armchair criminologists.” — Harold Schechter, criminologist on THE DYNAMICS OF MURDER

True crime titles include The Sex Slave Murders 1, 2, and 3, Murder Chronicles, Murder of the Banker’s Daughter, The Amityville Massacre, The “Gold Special” Train Robbery, , The Pickaxe Killers, Murder at the Pencil Factory, Killers of the Lonely Hearts, Dead at the Saddleworth Moor, and Masters of True Crime.

As a criminologist, R. Barri Flowers has appeared on The Biography Channel, Investigation Discovery, and Oxygen crime series.