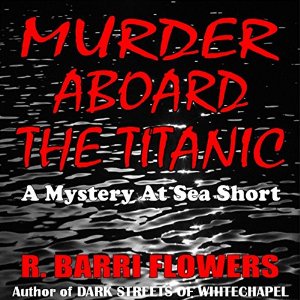 From award winning criminologist R. Barri Flowers and the bestselling author of Dark Streets of Whitechapel comes a gripping new historical mystery at sea short, Murder Aboard The Titanic.

A retired Scotland Yard detective recalls his run in with Jack the Ripper during the maiden voyage of the Titanic; while a doctor tries to fight his inner demons while traveling to America to honeymoon with his new bride.

In a complete bonus short story, Love Aboard The Titanic, two passengers engage in an ill-fated romance with consequences well beyond the sinking of the ship.

MURDER ABOARD THE TITANIC is available from Amazon, Audible and iTunes.

Praise for Books by R. Barri Flowers
“It gets no better than this! R. Barri Flowers has written another thriller guaranteed to hold onto its readers! –Huntress Reviews on Dark Streets of Whitechapel

The author has also written a number of top selling true crime titles, including Murder of the Banker’s Daughter, The “Gold Special” Train Robbery, The Sex Slave Murders 1 and 2, The Pickaxe Killers, Murder at the Pencil Factory, Killers of the Lonely Hearts, and Dead at the Saddleworth Moor.