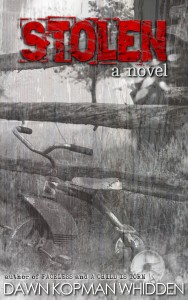 Another homicide has rocked the small town of Fallsburg, NY. In a cabin nestled deep in the woods two male victims are discovered,both gun shot victims. One is deceased the other one is barely alive. But it is not the murder itself that has detectives Jean Whitley and her new partner Marty Keal frantic to find out the answers of what occurred in that cabin, but it is the identities of the two small children also found at the scene. One child is quickly identified but the other a young boy remains a mystery. The only one with possible answers lies with the man who lay critically wounded and unconscious in the hospital because the unidentified boy either can not or will not speak to tell the investigators who he is and what happened in that cabin that left one man dead and another barely hanging on …

STOLEN is available from Amazon.

Stolen is a mystery by Dawn Kopman Whidden. When hunters find male victims with gunshot wounds and two traumatised children at a remote cabin, homicide detectives Jean Whitley and her partner Marty Keal are shocked by the things their investigation uncovers. One of the victims was a known pedophile and the other man is his son, Troy, who’s in a critical condition. What’s even more puzzling are the children’s behavior and lack of positive identities. One of the children is a boy with a name tag “Tristan,” who’s unable to speak. Evidence found at the cabin reveals children were abducted from their families and abused. This hits close to home as detective Keal remembers a missing boy from his childhood days. The investigation takes an unusual direction when Troy’s brother, Shane, lurks in the shadows, determined to take his brother and Tristan away from the authorities.

Stolen is a suspenseful mystery, and Dawn Kopman Whidden aroused my curiosity with its great beginning. The story is interesting, realistic and a bit emotional due to the chilling nature of the plot. I like the author’s eye for details, and I think she writes an insightful account of what victims and their families could possibly experience, if faced with this horror. Dawn Kopman Whidden nicely extracts the confusing emotions and thoughts of the characters, and they were convincing in a natural surrounding. Her writing form is fluent and unforced, and I am very impressed with the creative abilities of this author.

Dawn Kopman Whidden is a native New York author who grew up in the close-knit community of Little Neck Douglaston during the baby boomer era. She graduated from Queensboro Community college. IN 1989 she traded in her days of living in the bustling city for a more serene and tranquil life on a small farm in the town of Bell, located in North Central Florida. In 2012 she followed her long time dream of becoming an author and wrote her first novel A CHILD IS TORN, followed by FACELESS: A MYSTERY. She shares her life and love with her husband and an adopted stray dog she named Casey. She has also been blessed with two beautiful grandchildren