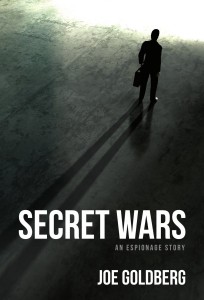 In the long history of the CIA’s global fight against terrorism, the weapons have remained the same: the use of force and covert action.

When terrorists funded by the Libyan government strike airports in Rome and Vienna in 1985, the CIA enlists top propaganda expert Mike Garnett to help recruit a high-ranking Libyan official, Foreign Minister Abdallah Mukhtar, to work for the CIA. As violence escalates between the US military and terrorists based in Libya, Garnett utilizes CIA assets in Hollywood to produce a propaganda video designed to convince Mukhtar he was betrayed by his own regime. Garnett’s plan works—but goes sideways when it motivates the Libyan official to do something Garnett didn’t even consider.

Sharp and insightful, Secret Wars: An Espionage Story is a thrilling tale of deception, betrayal, and patriotism—and Garnett soon learns they’re not as black and white as they seem when he’s forced to reevaluate the true nature of the business of deception.

SECRET WARS is available from Amazon, Barnes & Noble and CreateSpace.

“President Ronald Reagan told terrorists: “You can run but you can’t hide.” He was right because Joe Goldberg was on the job at CIA. In Secret Wars Joe recounts true stories in a heart-thumping novel that’s spot on for events then — and now. WARNING: Don’t start this book at bedtime unless you’re prepared to lose a night’s rest. I know. Back then, Joe and I lost a lot of sleep.”
– LtCol Oliver North, USMC (Ret.), Host of War Stories on FOX News Channel

“Joe Goldberg has rendered a terrific work of fiction that feels intense, authentic and utterly engaging. With realistic heroes, villains and settings, SECRET WARS feels like a riveting non-fiction account of a top secret scheme in the black realm of CIA counter terror. Fans of Argo will especially enjoy the intricate op at the center of SECRET WARS, but all lovers of the spy genre will want to devour this book in one sitting.”
– Mark Greaney- #1 NYT Bestselling Author of TOM CLANCY FULL FORCE AND EFFECT

“Secret Wars is a chillingly accurate inside look into the CIA and the world of espionage and deception. It immerses us in the violent moments when the deadly global war on terror went public. As Secret Wars illuminates in detail, this was fought by dedicated, hard-working people…civilians and military. Secret Wars is a true espionage novel by any definition.”
– Duane Clarridge, former CIA senior operations officer, founder of the CIA Counterterrorism Center

“As I read Secret Wars, I spent most of my time trying to figure out what was real and what was fiction. The story is set at the dawn of the United States’ war against terrorism crackles with realism and authenticity.”
– Kevin Maurer, award-winning journalist and best selling co-author of No Easy Day, a first hand account of the raid to kill Osama bin Laden

“Joe Goldberg’s novel, Secret Wars, is quite possibly the most authentic espionage thriller ever written in fiction. This story can be used as text for any budding intelligence professional or spy enthusiast. Absolutely unbelievable…yet so believable.”
– JT Patten, author of Safe Havens: Shadow Masters

Joe Goldberg spent eight years working for the Central Intelligence Agency where he engaged in covert action as well as information collection and analysis. During his tenure he earned a Meritorious Unit Citation and three Performance Awards.

A recipient of numerous prestigious awards over his thirty years of working in intelligence, Goldberg is a published author and frequent speaker on intelligence subjects.

He is a member of the International Thriller Writers, Association of Former Intelligence Officers, Strategic and Competitive Intelligence Professionals, the University of Iowa Political Science Advisory Board, and the Board of Directors of WorldChicago.

A graduate of the University of Iowa, he has degrees in Political Science, and Communications and Theater Arts, and a Master of Arts degree from Iowa in Communications.

Goldberg currently resides in Wheaton, Illinois, with his wife, Lynda, who is an elementary school teacher. Together they have three grown children and a dog named Ollie.