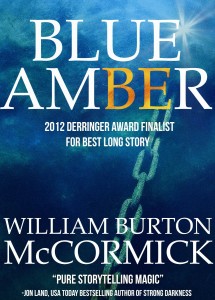 Imprisoned revolutionary Fricis Svaars knows his days are numbered. The Tsar’s secret police plot his murder within the walls of Riga prison, but Fricis won’t go quietly to his own assassination. His daring escape attempt takes him to the rocky shores of the Baltic Sea in winter, trapped between the guns of his relentless pursuers and the frigid waters of the open sea…

“Blue Amber crackles with energy, authenticity and pure storytelling magic from the first line nonstop to the last. William Burton McCormick’s timeless tale of men challenged by both the elements and their own psyches, set against the backdrop of Latvia in 1910, reads like Jack London with just enough James Rollins and Steve Berry thrown in for good measure. A beautifully realized vision that’s riveting in all respects.”
-Jon Land, USA Today bestselling author of Strong Darkness

BLUE AMBER is available from Amazon and Amazon UK.

“This is a grim tale of survival in the harshest of conditions, both man-made and natural and it is a credit to the writer that I was so captivated by a story that is not a genre I would normally read. Where do I begin? The sense of time and place is so strong I felt I was there on the Baltic coast. I can’t fault the writing which is equally strong and tight. There isn’t a word out of place. The writer’s knowledge of and authority over his subject matter meant that I remained gripped to the page from beginning to end and forgot I was reading ‘professionally’ rather than for pleasure. Stunning.”
-The Historical Novel Society

“If the mark of a good author is that that he, or she, transports us to a world we have never visited before, then William Burton McCormick is a master of the craft. In a few thousand words, he immerses us in the tense tale of Fricis, a Latvian revolutionary and political prisoner, who is about to be assassinated by the Russians. Trapped between his murderers and the sea, with the last minutes of his life marked by the pendulous swing of the lighthouse beam, ‘something colder than winter touched his soul’ and Fricis makes a final desperate bid for survival. His escape becomes as much a contest with the elements as with his pursuers.

Beautifully written, this short story explores exposes the brutality of the Tsarist oppression of the Baltic States, and it highlights the incredible feats of endurance humans can perform when driven by the power of love and that desperate, courageous need to survive. ”

Karen Charlton, author of The Heiress of Linn Hagh and Catching the Eagle.

William Burton McCormick’s fiction has appeared or is forthcoming in Alfred Hitchcock’s Mystery Magazine, Ellery Queen Mystery Magazine, Sherlock Holmes Mystery Magazine, Over My Dead Body and others. A two-time Derringer Award finalist, he is a graduate of the writing program at the University of Manchester and is a member of International Thriller Writers, Mystery Writers of America, and the Crime Writers’ Association.

A native of Nevada, William has lived in seven countries including Latvia, Estonia, Russia and Ukraine for the purpose of writing. You can learn more about his work at