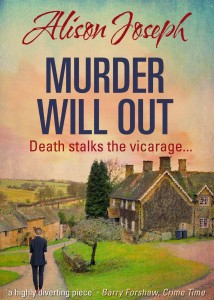 This novella features Agatha Christie as a detective. Set in her home village in 1923, it starts when a body is found at the local vicarage. Agatha, against her instincts, is drawn into the investigation, and finds herself at the heart of a mystery which echoes the concerns of England post the First World War.

‘Christie herself is the fulcrum of this highly diverting piece, delivered with all the quirky skill that is Joseph’s trademark.’ – Barry Forshaw, Crime Time.

MURDER WILL OUT is available from Amazon.

ALISON JOSEPH is a London-based crime writer and award-winning radio dramatist. She is the author of the series of novels featuring Sister Agnes, a contemporary detective nun, and also ‘Dying to Know,’ a crime novel abut particle physics featuring DI Berenice Killick. Alison is Chair of the British Crime Writers Association until April 2015.

Skin of My Teeth: Volume 1 (Skinned: Book 3) by Judith Graves