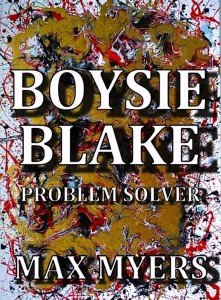 Hollywood: sex, murder, power, corruption, fraud, theft and the obsession with the Cult Of Celebrity; then there are bad days.

Boysie Blake solves problems. Yours. He doesn’t need the money. You can be rich or poor, famous or not, it doesn’t matter. What does, is that you’re straight with him. The last thing you want is to become the problem he has to solve.

Marjorie Wallace, art dealer to Hollywood’s powerful elite, has brokered a deal between two of its most formidable and dangerous players, for a previously unknown and never before seen Jackson Pollock. Problem is, the painting’s a 3D printed fake, and now she’s on the hook for a $150 million.

Boysie knows there will be blood. He has to make sure it’s not his, or Marjorie’s.

The buyer, her ex-husband, David Gandolfo, is connected to the Vatican and the US government; now he wants her dead. The seller, Jack Valentine, more violent gangster than B movie producer, wants Boysie dead.

The Hollywood rumor mill has it that in 2002, Gandolfo had tried to buy Dan Brown’s manuscript, The Da Vinci Code. Boysie’s stepdad had backed the wrong horse by loaning the agent that was brokering the deal, one million dollars so that he could buy the manuscript for himself. Brown smelled a rat and withdrew it. Gandolfo never forgave Michael or the agent. Now both are dead.

At 63, Marjorie is beautiful, very much alive and Boysie is unable to resist. However, she’s twice his age and after their one night together, the guilt of it weighs on her, especially as she is also his mum’s best friend. She breaks it off with him, much to his disappointment.

Boysie is summoned to meet Cardinale Christoforo in the one place he shouldn’t – the Vatican. He returns to L.A. understanding that there is no justice, only the perception of it and if you can’t find it one way, then find it another, because that’s all you have.

BOYSIE BLAKE is available from Amazon.

Boysie Blake: Problem Solver by Max Myers is murder mystery of epic proportions with all the ingredients for a top seller. Max Myers seems to have his finger on the pulse of Hollywood society – the dark side of it – and has written a novel that is worthy of the big screen. Excellent storyline, fantastic characters and the way it has been written is just amazing. It has a way of catching you unawares and keeping you hanging, making you read to find out what’s coming next. Great story, and I hope there’s more where this came from.

If you love a book so real that you can smell the early California morning, feel the ocean chilled air on your skin as you finish your morning climb up the hill, so real that you can hear the freeway traffic and smell gasoline on the breeze by mid-afternoon; if you like your characters both believable and colorful, and you want action from today’s headline before it ever becomes a headline, grab Max Myers’ new book, Boysie Blake Problem Solver, and find yourself a comfy sofa!

I found myself hating his enemies, cheering on his friends, and watching his back, not that he needed my help. And if I’m ever in trouble, I do want Boysie in my corner. I loved every page of this book, and I do so hope that Myers writes a sequel!

Ex boxer, bouncer and former Vice President of a Brooklyn MC, Max is the embodiment of the American Dream; he completely turned his life around, and is now a multiple award winning writer & director.

Born in Iserlohn, West Germany, he is the son of an English Army soldier and a local German woman. He spent the first years of his life traveling with his family to a variety of postings including London, Germany, South Australia and Gibraltar.

At age 12, he landed on the mean streets of East London, where he joined a rock-n-roll-band, learned to play drums and a respectable blues harp, and did some serious amateur boxing. He left home and school when he was 15, eventually moving into tour management and sound mixing, working and playing for many famous European acts: Mungo Jerry, Manfred Mann, Wings, Berlin Rock Ensemble and Moonraker. Inevitably, he was drawn to the American shores, landing in Baltimore, MD, where he continued to work and play for now-forgotten bands, Face Dancer and Objects, amongst others.

In the early 90s, Max relocated to New York and started a music production company, but soon the collapse of Wall Street left him homeless and penniless. He drew upon his early days as an amateur boxer and informed by his experiences in the violent neighborhoods of East London, took on a succession of jobs as doorman and bouncer at some of New York’s edgier nightclubs. It was in this era that he continued his street education, joining a biker gang and experiencing firsthand the lawlessness and corruption of society’s underbelly.

By 1994, he recognized there was no future for him on the streets, so he took a job waiting tables and began his writing career. His first big break came in 1997 when he landed a development deal with Martin Scorsese’s Cappa Productions, under the sage and gentle guidance of Barbara De Fina.

Succumbing to the lure of Hollywood, Max moved west where he continues to write, direct and teach.