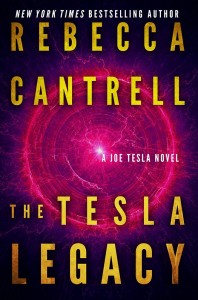 In this sequel to the award-winning The World Beneath, software genius, Joe Tesla, confronts an equally brilliant and far more powerful foe.

Still crippled by agoraphobia and confined to the tunnels under New York City, Joe is haunted by the fact that he cannot even attend his father’s funeral. His father’s death brings threats to the safety of Joe’s underground home: guilt over the broken relationship that can never be healed, a mysterious box of papers inherited from eccentric inventor Nikola Tesla, and a ruthless enemy determined to steal those papers no matter the cost.

Mystified by why his inheritance is so valuable, Joe and his service dog, Edison, follow clues left a century ago by Joe’s famous ancestor to reveal the power of his family legacy. While Joe must rely on his considerable talents as a hacker, he must also reach out to friends.

But whom can he trust as he battles to save his beloved city from . . . The Tesla Legacy?

THE TESLA LEGACY is available from Amazon.

Praise for the first in the series:

“THE WORLD BENEATH by Rebecca Cantrell is a heart-pounding thriller with an infective puzzle! Rebecca Cantrell brings to life the amazing world beneath the sidewalks of New York…a virtual page-turner!” – Publisher’s Marketplace

“Cantrell has also ventured into deep, dark places — most literally — for her new novel, “The World Beneath,” which plunges the reader into New York’s vast subway system…a taut and dangerous struggle.” — The Edge

“Cantrell’s THE WORLD BENEATH simply blew me away: exciting, visceral, inventive, illuminating. The main character, Joe Tesla, is as charming as he is resourceful. He’s an agoraphobic trapped within the dark bowels of New York City who must face a threat to the bright world above him. Full of tantalizing true secrets of that subterranean world, matched with a breakneck pacing of a shocking thriller, here is a novel that shines a light on the beauty and horror hidden just out of sight beneath the world’s greatest city. So grab a flashlight and get ready an adventure like no other.” – James Rollins, New York Times bestselling author of The Sixth Extinction

Death of a Songbird by Christine Goff