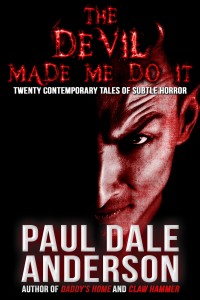 Digital reprint of the 1985 edition. Twenty short stories of subtle horror. These were early stories by Paul Dale Anderson that originally appeared in The Horror Show Magazine, The Arkham Sampler, and small-press horror zines in the early 1980s. Collected for the first time in 1985 and published by The Strange Company in a limited edition, the collection is reprinted by Macabre Ink and Crossroad Press in a new digital edition with an exciting new cover by David Dodd.

THE DEVIL MADE ME DO IT is available from Amazon, Barnes & Noble and Smashwords.