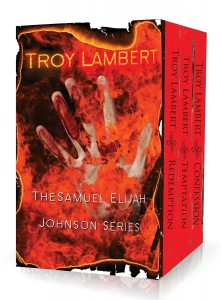 The complete Samuel Elijah Johnson Trilogy in one book set!

Redemption: What do prison and church have in common? In both places you can learn of your need for redemption. You can even determine to right the wrongs you have done: you can determine to redeem yourself. However, true Redemption is not found inside the walls of a church or a prison. Sometimes you have to go further and do more to find it than you ever imagined.

Redemption is a dark psychological thriller that tells the story of an ex-con turned attorney, an insane man with a secret addiction, and a marriage spoiled by poor choices.

Temptation: Sam, a wrongly accused man who obtained his law degree in prison, helped others find Redemption when he won his freedom. Whether through luck, good timing, or his uncanny ability to tell truth from a lie, Sam has won every case he’s taken on. True, they’ve been small time parole hearings or appeals so far. But when his assistant is in an accident, and he has to take on another employee, his luck in the courtroom may be changing. A mysterious stranger and a series of tragedies make his next case the most challenging and tempting of them all. The cast of Redemption and a host of new characters return, each one of them forced to face Temptation in their own way in this fast paced thriller.

Confession: Samuel Elijah Johnson spent time in prison, but earned his Juris doctorate while incarcerated. Now on the outside, he thinks he is on the right track. Until an attempt on his life brings him face-to-face with his past, and the family he’d rather forget.

His mother’s belief that he is some kind of Messiah haunts him, and he discovers she is not alone.

There is an entire church that shares her beliefs, and more. They think they are doing God’s work, and convince Sam to join them. But evil rears its ugly head, and he discovers a different kind of prison. One that glorifies confession, demands obedience, and punishes transgression. Will he take his place among their leaders? Or will he try to walk away, only to find someone is willing to kill for his final Confession?

Author Troy Lambert — recently nominated for the Idaho Statesman’s “Best of Treasure Valley” publication as an “Author of the Year” — has recently released the third and final book in the Samuel Elijah Johnson Series, titled Confession, as well a collection of short stories, titled Into the Darkness, with Marlie Harris. Both books are published by Rhetorical Press.

Passionate about writing dark, psychological thrillers, Troy’s work includes Broken Bones, a collection of his short stories; Redemption, the first in the Samuel Elijah Johnson Series; Temptation, the sequel to Redemption; along with the horror, Satanarium, co-authored with Poppet, and published by Wild Wolf Publishing.

Troy grew up in southern Idaho, and after many adventures, including a short stint in the US Army and a diverse education, he returned to Boise, where he lives with his wife, two of his five children, and two very talented dogs. He enjoys the outdoors as an active skier, cyclist, hiker, angler, hunter, and is a terrible beginning golfer.