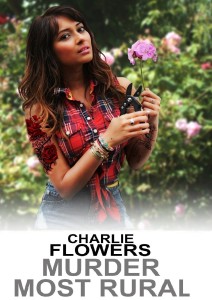 Meet Riz and Bang-Bang. MOD troubleshooters by trade, their work normally involves covert ops and counterterrorism. A routine exercise with the SAS takes them to a sleepy Essex village, where not only do they stick out somewhat as a British Pakistani couple, but there has also been a mysterious suicide.
Or have they stumbled across the perfect murder?

“I like Charlie Flowers. His writing is so sharp, so exact. Like slicing celery on a cutting board. After having read other tales in the Riz saga, I’m happy to say that this most recent story, Murder Most Rural, is just as tight and as clever as his other books. And you’re rewarded for starting from the beginning of the series, as the relationship between Riz and Bang-Bang is enjoyable and, even though some of the ordeals they go through are unbelievable, seems believable. This power couple shoots, breaks glass over people’s heads, and then kiss. They compliment each other. They’re definitely one of my favorite romantic duos in modern day story-telling. And the chapters move so briskly, even more so than in books past. You feel compelled to keep flipping pages, just like in every good thriller. As long as Charlie Flowers keeps pumping out these Riz stories, I’ll keep reading them.” RICH KNIGHT

MURDER MOST RURAL is available from Amazon and Amazon UK.

Charlie Flowers was born in Eastern Europe sometime in the late Sixties and arrived with his family in Britain in 1975. After training as a journalist in London he had a varied career as reporter, roadie, truck driver and record label boss. In the late Nineties he formed two cult bands, and is currently an adviser on terrorism and extremism to certain departments and think tanks.
Charlie Flowers is published by Endeavour Press, and is a member of the Crime Writers’ Association and International Thriller Writers, Inc.