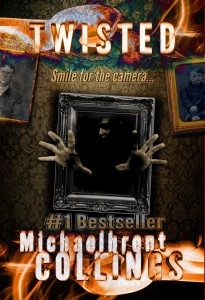 From an international bestseller and one of Amazon’s most popular horror writers:

“Part ghost story and part history, part parental terrors made real and part paranormal activity, the resulting combination is all goosebump-raising nerve-squirming chills. Another solid winner from an author who’s yet to miss the mark.” – The Horror Fiction Review

TWISTED is available from Amazon, Barnes & Noble and Kobo.