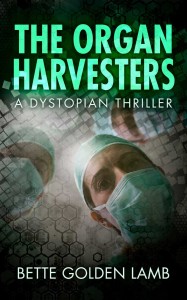 he Corporate-Government wars of 2020 resulted in a global Corporit (sic) dictatorship. Its legacy? Escalating climate change, limited food supplies, and clean air only for the elite.

Dr. Zoe Hidalga, organ harvester in the powerful tri-state medical corporation, is infected with VMAS, an incurable retrovirus that killed her husband.. At that time the Corporits snatched her daughter, claimed Zoe was an unfit mother. She is now marked for termination and frantic to get her child back before they drag her away.

Andrew Potter, respected Corporit robotic genius and mole, has formed a secret resistance group that plans to bring Corporit rule down. He can’t risk discovery, but he’s Zoe’s friend and will help her escape before the CAPOs can grab her.

Zoe is hidden in the rebellious society of Noncorps – outcasts and innovators who wouldn’t or couldn’t survive under the Corporits. The Noncorp society thrives under the guidance and protection of Asher Wind Storm. A visionary, healer, leader of the Revivers, and Zoe’s future lover ?his followers are already regenerating the Earth’s flora and fauna under his mammoth Caplac domes.

There is hope in this dystopian medical thriller, where Zoe fights a life or death battle to survive and rescue her child from Corporit domination.

THE ORGAN HARVESTERS is available from Amazon.

BETTE GOLDEN LAMB has developed parallel careers as an RN, writer, sculptor, and ceramist. Her art works can be found in a number of galleries and in private collections nationally. Bette, unmistakably from the Bronx, says that’s a clue as to why she loves to write dark and gritty thrillers. She has co-authored, with husband J. J., six crime novels, four in the Gina Mazzio RN medical thriller series. She’s also the author of a dystopian thriller, The Organ Harvesters, published by Assent Publishing in December 2014 in both trade paperback and ebook. Bette is a member of Sisters in Crime and International Thriller Writers. Read more at www.bettelamb.com.