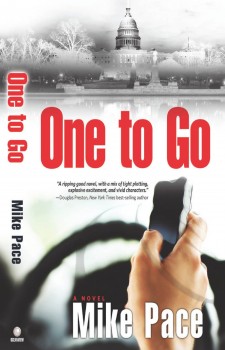 Mike Pace’s new thriller, ONE TO GO, is a deft mix of sub-genres—legal and political with a dash of the supernatural. The story follows a young Washington lawyer, Tom Booker. While driving across Memorial Bridge, Tom, distracted while texting, causes an accident with a minivan carrying five young girls, including his own seven-year-old daughter. The force of the collision flips the van up on two wheels, but just as the vehicle’s about to fall into the Potomac River killing all on board time freezes for everyone and everything—except Tom. He exits his car to see his daughter through the van window, frozen in time, but can do nothing to save her. Chad and Brit, a young couple who appear to have just stepped out of an Abercrombie & Fitch ad, approach. They offer Tom a Faustian deal, a “rewind” where time would spin back to just before the collision, allowing Tom to avoid the accident—no one would die. The price for this deal? In a “soul exchange” Tom has to agree to kill five random strangers instead. He quickly agrees, anything to save his daughter.

Later Tom laughs at the hallucination he experienced and pays it no mind. Preppy demons from Hell? Ridiculous. Then his sister in law, the driver of the van dies, bludgeoned to death by her husband. Chad and Brit appear on Tom’s cell phone screen, smile and say, “One down, four to go.”

My God, the bridge incident was real.

Tom has never held, much less fired, a gun in his life. He’s lived a middle-class existence in a middle-class neighborhood. Now to save his daughter he must turn into a serial killer and commit a murder every two weeks or the girls in the van will die.

Despite the brief supernatural set-up, it’s the legal and political elements of the book that dominate as Tom struggles to dodge the police, efforts which unwittingly embroil him in a Washington political scandal. The author’s experience as a federal prosecutor in Washington comes through as the reader follows Tom through the criminal justice system.

ONE TO GO has received rave reviews and Mike has graciously agreed to answer a few questions.

Mike, You’ve received strong praise for ONE TO GO from such thriller luminaries as Steve Berry, Gayle Lynds, Jon Land, and Doug Preston who called your book “ripping good, with a mix of tight plotting, explosive excitement and vivid characters.” You must feel very pleased with such compliments.

Pleased, honored, and humbled. It’s like a rookie pitcher being praised by a group of hall-of-famers.

Where did you get the idea?

The original idea arose because I heard parents say all the time they’d do anything to save their child. As a parent myself, I’ve said the same thing. I wondered, is there any line a parent wouldn’t cross? Would a parent become a serial killer? I thought about the near indescribable internal anguish I would suffer under such circumstances and hopefully reflected those conflicting emotions in the book.

Mike, tell us about Oceanview Publishing.

An amazing group of people. They’ve been very welcoming and I couldn’t recommend them more highly. Pat Gussin, one of the publishers, is an accomplished author in her own right. Her most recent book, After the Fall, is exceptional. Strongest recommendation.

You are not the first attorney to become an author. What made you take this fork in your road?

Lawyers, especially litigators, are showmen at heart. We love to strut in front of a jury and try to persuade twelve strangers to agree on a particular point of view, so the fork in the road is not very pronounced. I remember writing skits for elementary school Christmas programs and have been engaging in creative writing of some sort ever since. The commute from Annapolis to my law office in Washington every day lasted about forty-five minutes, and I’d use the time to dictate scenes in stage and screen plays while I drove. I’ve been involved in local community theater, I sit on the board of the Annapolis Film Festival, and one of my screenplays was just optioned by a major producer, so I remain as active as I can.

According to your bio you taught school in inner city DC while going to law school. Do you miss the classroom?

I miss the kids. The elementary school was located in one of the roughest parts of the city, and virtually all of the students came from at-risk environments. They were wonderful, loved to learn, and no different in their exuberance from students in any suburban elementary school. It was heartbreaking to know that so many of them as they got older and entered junior and senior high school wouldn’t be able to overcome the daunting odds facing them as a result of their environment. As a result of that experience, I’ve become a big believer in early childhood education. Maybe if we can reach these kids earlier we’d have a better chance of engraving a positive impression that would help them survive their teen years. (I’ve referenced some of my teaching experiences in the book.)

Are you still a practicing attorney or do you write full time?

I have a couple of clients left but most of my time is spent writing.

What is your favorite time and place to write?

I’m a morning person so I try to get to my desk as soon as possible. After about two o’clock I’m usually done. I write in my office where I can look out the window at the West River. The problem is the wonderful view—sailboats, waterfowl, amazing sunrises—offers an easy diversion when I’m tempted to procrastinate.

You’ve been active in ITW, serving on a panel during our 2014 conference and assisting as a volunteer. How has this organization been helpful?

Many ways. The seminars and panels of course. And last year participating in Doug Lyle’s Master Class was great. But the most helpful, I think, has been being able to interact on an informal basis with the best writers in the world. I can think of no other profession where you’re given an opportunity to hang out with the cool kids.

So you’ve just sent in the final edits, what’s the first fun thing you do when you put a book to bed?

Share a special bottle of Valpolicella with my wife, Anne.

Thanks for taking the time to answer some questions. Good luck with the new novel!

My pleasure. And thanks. 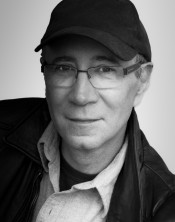 Born in Pittsburgh, Mike received a B.F.A. degree from the University of Illinois and a law degree from Georgetown University where he served on the editorial board of the law review. He taught school in Washington’s inner-city before being appointed Assistant U.S. Attorney for Washington. After a stint as a commercial litigator, he served as General Counsel to an environmental services company before resigning to practice law part-time, thereby allowing him the time to devote to his first love, creative writing. He lives on the Chesapeake Bay with his wife and two dogs.

His new book, ONE TO GO, published by Oceanview, has been called “blisteringly good,” “pulse pounding,” “explosive,” and a “post-modern take on early Stephen King,” by such acclaimed authors as Steve Berry, Doug Preston, Gayle Lynds, and Jon Land.