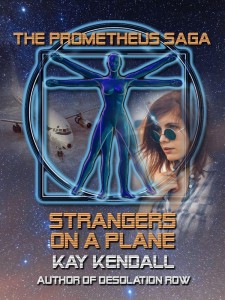 In 1969 during a flight across North America, a young mother traveling with her infant meets an elderly woman who displays unusual powers. But when a catastrophe threatens, are those powers strong enough to avert disaster? This short story folds into Kay’s mystery series published by Stairway Press that features the young woman, amateur sleuth Austin Starr. — A short story from The Prometheus Saga — Strangers on a Plane.

In The Prometheus Saga, twelve authors unite to interpret how an alien presence would interact with the human condition over a time period that spans from the dawn of man to the present. The stories cross genres and genders, allowing for entirely different narratives and insights on historical events and the human experience.

Each story is self-contained and can be read in any order. The reader is free to select any of the stories at random to begin their experience. Each short story has a different setting in history. The book description will explain the time period setting for each particular story.

STRANGERS ON A PLANE is available from Amazon.

Kay Kendall historical mysteries set during the sixties. The Vietnam War hovers in the background and bedevils her characters. DESOLATION ROW explores the life of a typical young woman–not a headline maker, not a Hanoi Jane or Angela Davis, but a moderate who nonetheless gets swept up by history’s tides during the turbulent sixties. The second Austin Starr mystery, RAINY DAY WOMEN, will be published by Stairway Press of Seattle in summer 2015.

Kendall was a Phi Beta Kappa graduate of the University of Kansas and a Woodrow Wilson Fellow at Harvard University’s graduate school, and earned degrees in Russian history from the University of British Columbia. She lives in Texas with her husband, three house rabbits, and one spaniel.