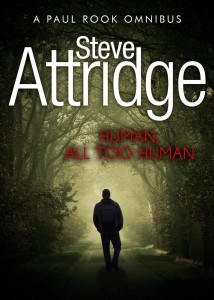 Omnibus edition of 3 bestselling A Mind for Murder thrillers with protagonist Paul Rook, eccentric and irascible philosopher and private investigator.

Fast-paced and brilliantly written Kindle Singles. The plots are quick to develop. Where Attridge really shines is in character development. I love the idea of the failing philosophy professor whose personal life is in tatters (one book opens with Rook stalking his own wife in the hope of a date) and professional reputation hangs by a thread. Such an investigator will need help. It comes in the form of his witty daughter, who is often given the task of piecing together Rook’s relationships, as well as evidence from each case.

HUMAN ALL TOO HUMAN is available from Amazon and Amazon UK.

Steve Attridge is an award-winning screen writer and novelist. His television dramas include Hawkins and The Boot Street Band and his other books include ‘Waking Dreams’, ‘Behind Closed Doors’, and ‘Bottom of the List’. He also writes for theatre and film.