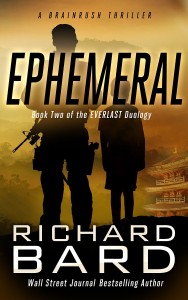 Jake’s family and closest friends have been taken by a mysterious organization with access to every surveillance system on the planet. In this exciting conclusion to the Everlast Duology, Jake must lever every scrap of his own failing brain if he is to have any chance of evading capture, rescuing his loved ones, and stopping a madman’s plans for global chaos dead in its tracks.

EPHEMERAL is available from Amazon and Amazon UK.

“EPHEMERAL doesn’t hold back on danger, thrills, or page-turning action. Five Stars and named as one of IndieReader’s Best Books of 2014.” – IndieReader.com

“The action will get your heart pumping, and if you aren’t careful you may be up well after your bedtime. Once you start, you won’t want to stop until it’s over.” – Self Publishing Review Magazine