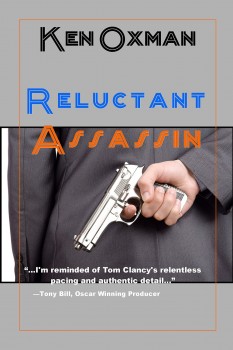 From escaping the marriage clutches of a Spanish beauty to being taken in the night and dumped in an Indian village deep inland along the shores of Lake Maracaibo, Venezuela, debut author Ken Oxman has lived a thrilling life of adventure.

Back in his days as a Navy officer, Oxman became fascinated with the dark and dangerous. This, coupled with the stories told to him by his father, a WWII RAF navigator on the British Mosquito and Sunderland Flying Boat, sparked the idea for RELUCTANT ASSASSIN, and his protagonist, U.S. Navy Lieutenant Nathan Blake.

Blake is a hard-wired up-close assassin and bound by his duty to serve—but, as Oxman points out, it’s not the career he really wants. His dream is to be a sea-going officer.

“I know people who are very good at something and yet choose to make a life doing something else,” Oxman says. “It’s as if they can’t believe they could get by doing something they love. The antithesis of that is someone doing what they are good at but wanting to do something else. For example, I know someone who is a very clever engineer, but really he wants to paint. He would like to make a living as a painter but he’s just not good enough.”

The idea of that intrigued Oxman—the notion that someone could be an assassin, for instance, and yet live another life. This fact is brought out in the book when after sidelining a group of thugs, Blake’s girlfriend asks of him, “Who are you?” His reply, “Someone else, sometimes.”

Oxman explores this side of Blake with caution, noting that even the most trained individuals can have unpredictable reactions when faced with unexpected danger. Like that one time, Oxman says, when he had a gun stuck in his mouth in a sleazy bar in Colombia.

“If someone sticks a pistol in your mouth and you’re not James Bond then how do you react?” he says. “It’s a little hazy now, but I do remember thinking, what should I do, or more likely what could I do? As the guy was tapping my teeth with the pistol—the biggest pistol I have ever seen—I did nothing. Just stood there. Afraid. No hero.”

Eventually, the guy yanked the gun out of Oxman’s mouth—splitting his lip—and left. Everyone in the bar went on with their business, but for Oxman, it was one of many experiences that has shaped his stories.

These days, Oxman prefers to do his research from the comforts of his home, where he can navigate troubled waters with the click of a mouse rather than alone on the sea.

“In this age of the Internet, research is so much more at hand,” he says. “There is little need to travel—you can go anywhere in search of knowledge.”

Ideal for Oxman, whose at-home education now extends to how to find his place in the ever-growing thriller market. Though RELUCTANT ASSASSIN has found a home, Oxman’s journey to publication was perhaps a bit tumultuous—a tentative yes, followed by months of no communication, a request for a full re-submission, and finally, the dream contract.

“I signed so fast the ink melted,” Oxman says. “So my advice to everyone who asks me is: Never give up! If you believe in what you have done, keep pushing it out there. Eventually, someone will see it. But you still have to produce the goods.”

As for Oxman, he’s busy “producing the goods” by working on various screenplays and the sequel for RELUCTANT ASSASSIN. 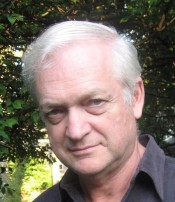 Ken Oxman’s life has been an adventure, from jumping off a cliff with an early hang glider to having a pistol stuck in his mouth in a sleazy bar in Cartagena, Colombia. From fighting a dangerous sea alone to almost being sold as a white slave in Mozambique, to being taken in the night from a beautiful pomegranate grove motel and dumped in an Indian village deep inland along the shores of Lake Maracaibo, Venezuela. He has lived adventures and hopes readers might get that and enjoy reading them in his book. He has been a cadet officer in the British Merchant navy, a qualified teacher of English & drama, a stage actor & director. He directed a series of Noel Coward plays for NPR, wrote & presented for the BBC, wrote & presented weekly commentaries for Connecticut Public Radio/NPR. He has worked as a public speaking coach and sailing instructor and helps his wife Patricia with her antiques business.