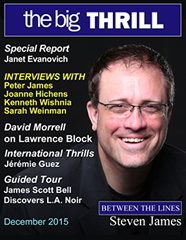 Read the stories that were in the December edition of the Big Thrill.

The interviews in the December issue are packed with no-holds-barred insights into the world of fiction writing, whether it’s Steven James on how important it is to write organically (“throw out your outline”), Janet Evanovich on the biggest challenge to writing a long series, or Peter James on why he’s happy not to be an “overnight success.”

The Big Thrill is proud to run David Morrell’s conversation with Lawrence Block—this story is not to be missed! Other highlights: James Scott Bell reveals L.A.’s most intriguing noir scenes in “Author Guided Tour,” Anne Trager spells out what it takes to be published in France in “Industry Report,” and Dawn Ius reports on the evolving appeal of the unreliable narrator in “Trend Watch.” Kenneth Wishnia reveals what went into editing the anthology Jewish Noir and Sarah Weinman discusses women writing crime fiction, past and present.

Hot off the press:
Click on the book title below to read the feature story or click here to scroll through all of this month’s articles.

Your ThrillerFest team is already hard at work planning for next July’s conference where we’ll feature 2016 ThrillerMaster Heather Graham and bestselling authors C.J. Box, Gillian Flynn and Walter Mosley. The 2016 Silver Bullet will be announced shortly. Like a compelling page-turner, we need to keep you in suspense, so stay tuned for more details!

Master CraftFest: Don’t miss this opportunity to study with the Masters of the genre in a one-day intensive workshop to take your writing to the next level. Everyone is welcome, from beginning writers to well-established authors. The instructors this year will be Steve Berry, Grant Blackwood, David Corbett, Meg Gardiner, Heather Graham, Andrew Gross, Richard Krevolin (Screen Writing) and Gayle Lynds.

CraftFest: Director D.P. Lyle, M.D. is already recruiting talented teachers to broaden your knowledge about the craft of writing as well as experts in fields like forensics and firearms so you can get the facts right in your novel.

PitchFest: PitchFest is dedicated to pitching your project face-to-face to agents, editors, and producers. It’s an unprecedented opportunity for writers looking to get or change agents. Check out some success stories!

ThrillerFest: We’re planning some phenomenal panels, always trying to innovate and entertain. Join us for the spotlight interviews, cocktail parties, workshops, and fabulous networking opportunities. Please check the volunteer box during registration, as it’s a great way to make new friends and help out ITW.

In this seven-week program, which begins March 14nd, 2016, the craft of thriller writing will be front and center. Each instructor will teach an aspect of craft though a podcast, written materials that include further reading and study suggestions, and an entire week of online Q&A with the registered students. The goal is simple: To make each student a better writer.

Like the past two years, the online school will fill up very quickly, so register soon. Visit ITW’s Online Thriller School for more information.

Whether you’re a fan or an author, you’ll want to join the Thriller Roundtable discussions at The Big Thrill website, where each week a new group of authors discuss everything from what they love about writing thrillers, to what they’ve learned, and more.

Check out what’s in store for December. You won’t want to miss it!

November 30 – December 6: “Is poison as a murder method old-fashioned or are there some new methods for poisons that evade detection?”
December 7 – 13: “Underdog characters are popular in American thrillers. Are they as popular in international plots?”
December 14 – 20: “Are thriller writers active enough on social media? Must a writer have to participate in social media, or does the constant messaging and familiarity diminish suspense?”
December 21 – 27: NO ROUNDTABLE – CHRISTMAS
December 28 – January 3: NO ROUNDTABLE – NEW YEAR’S