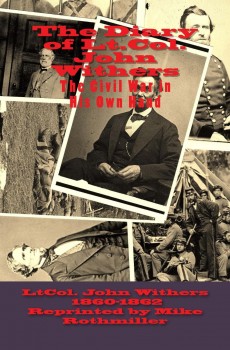 Lt. Col. John Withers a graduate of the United States Military Academy who resigned his commission in the union army in March 1861 and was appointed a Captain in the Confederate Army on March 29, 1861.

His diary provides an exceptionally intimate window into his military and family life which is rarely seen in publications. His love for his family is evident and his dedication to duty comes through clearly.

At times, his diary reads similar to a novel; capturing the joy, sadness, death, destruction, horrors and mundane activities of everyday life during times of war. His entries include meeting Presidents, British Royalty and Generals of the Union and Confederacy and learning of major battles in real time.

One must remember, this was his personal diary, it was never meant for public review. Yet, it is a marvelously profound work and powerful piece of history.

THE DIARY OF LT. COL. JOHN WITHERS is available from Amazon.