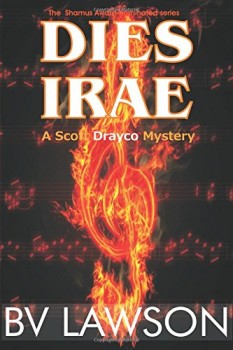 Three years ago, Scott Drayco left the FBI after an incident involving his partner, Mark “Sarg” Sargosian. Now a freelance crime consultant, Drayco often helps law enforcement on cases, but he never imagined his estranged former partner would turn up on his doorstep, pleading for Drayco’s help. A co-ed at an elite Washington, D.C., private college has been murdered, and the victim’s friend – Sarg’s own daughter Tara – might be the next target.

The killer left behind a puzzling music code at the crime scene, and Drayco soon learns he has two things in common with the murdered girl – a music background and synesthesia. The case takes an even stranger turn after a second murder and a second music code, with signs pointing toward a possible ritualistic killing. Then, Drayco himself starts receiving coded messages and finds himself locked in a deadly game with a madman where only one of them may come out alive.

DIES IRAE is available from Amazon, Barnes & Noble and Google.

Author, poet, and journalist BV Lawson’s award-winning stories, poems and articles have appeared in dozens of publications and anthologies. A four-time Derringer Award finalist and 2012 winner for her short fiction, BV was also honored by the American Independent Writers and Maryland Writers Association for her Scott Drayco series, with the debut novel, Played to Death, named Best Mystery in the 2015 Next Generation Indie Book Awards and a Shamus Award finalist. BV currently lives in Virginia with her husband and enjoys flying above the Chesapeake Bay in a little Cessna. Visit her website and sign up for her newsletter at bvlawson.com. No ticket required.