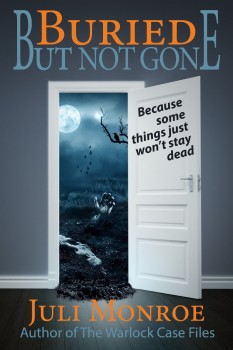 Denise Evans thought she could move on with her life after the horrific suicide of her husband. Until someone started killing her students. A local warlock, Jim Novik, suspects someone or some thing may be using her husband from beyond the grave. Some things are Buried But Not Gone

BURIED BUT NOT GONE is available from Amazon, Barnes & Noble and Smashwords.

Juli Monroe is the author of The Warlock Case files, an urban fantasy series set in the Washington DC Metro area. The series focuses on a warlock and vampire and the various supernatural creatures (both good and not) who inhabit the nation’s capitol. She recently published the first book in a spin-off series featuring another DC-based warlock, and the two series are intended to overlap frequently.

Juli has been professionally writing fiction since 2011, but she’s been writing and editing for most of her career. In addition to being a writer, she’s a networking and social media coach, and the author of The Enthusiastic Networker, a book on business networking.