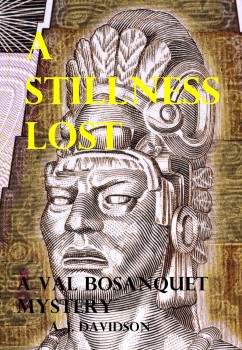 Following Catalina’s liver cancer diagnosis, a broken Val and his friend Dave travel to Guatemala in a last-ditch attempt to trace Rosa Silva, Catalina’s sister, missing for over twenty years. Within twenty-four hours the two men are fugitives, desperate to remain one step ahead of the Guatemalan police, and totally unaware that an old adversary and the ruthless Zeta cartel have them in their sights. Their hunt for Rosa exposes a mountain village’s dark secret dating back to Guatemala’s civil war and leads to a showdown with terrifying consequences.

A STILLNESS LOST is available from Amazon and Smashwords.

AJ has a degree in Social Anthropology. Married for 32 years, he has two children, a Harrier hound and a cat called Dusty.

Buried But Not Gone by Juli Monroe

As Crooked as a Dog's Hind Leg by Toni L.P. Kelner