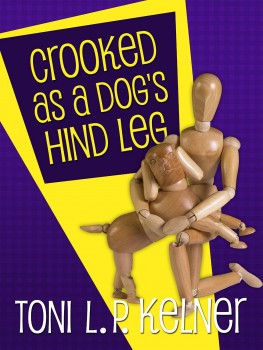 From the Agatha award-winning author of the Laura Fleming Southern cozy mystery series, comes a new anthology of short stories set in and around Laura Fleming’s own Byerly, North Carolina.

Collected together for the first time, the seven stories feature fan favorite characters such as Sue Randolph, Wynette Weston, Belva Tucker, and Byerly police chief Junior Norton, in addition to all the quirky aunts, uncles, and cousins that make up the extended Burnette family.

Also includes two Laura Fleming stories, as well as the Agatha Award-nominated “The Death of Erik the Redneck” and the Anthony and Macavity awards-nominated “Bible Belt.” Packed with the same smart, witty storytelling that’s made the Laura Fleming mystery series a hit with readers and reviewers alike, Crooked as a Dog’s Hind Leg is a true Byerly homecoming.

AS CROOKED AS A DOG’S HIND LEG is available from Amazon, Barnes & Noble and Kobo.

Toni L.P Kelner is the author of the Laura Fleming mysteries and the “Where are they now?” novels. Both series are available as audio books and e-books. Kelner is also the author of numerous short stories, and co-edits bestselling urban fantasy anthologies with Charlaine Harris. Their most recent is Dead But Not Forgotten. Kelner has won the Agatha Award and an RT BookClub Lifetime Achievement Award, and has been nominated multiple times for the Anthony, the Macavity, and the Derringer. As Leigh Perry, she writes the Family Skeleton series for Berkley Prime Crime.

A Stillness Lost by A. J. Davidson