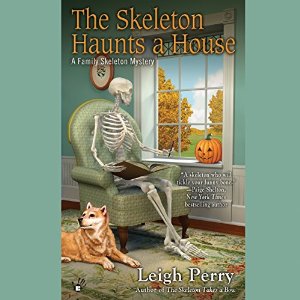 What holiday could bring more warmth to a skeleton’s chest cavity than Halloween? And when you’re a living skeleton who’s not supposed to be seen outside the house, it’s a welcome chance to get some fresh air and rub bony elbows with people. That’s why Sid doesn’t mind wearing a full-body dog suit and going as Scooby-Doo along with Georgia Thackery’s Velma to the Halloween Howl.

Sid can’t wait to go through the Haunted House—but he gets rattled for real when a genuine dead body is discovered. Trapped inside as the police quickly seal off the crime scene, Sid makes no bones about dropping the dog suit and posing as an actual skeleton. This murder is a skull-scratcher, but as long as Sid is on the inside, he might as well case the joint to figure out who used the cover of darkness to commit the perfect crime…

THE SKELETON HAUNTS A HOUSE is available from Amazon.

Leigh Perry writes the Family Skeleton mysteries. The Skeleton Haunts a House, the third, was released in October 2015. As Toni L.P. Kelner, she’s the co-editor of paranormal fiction anthologies with Charlaine Harris; the author of eleven mystery novels; and an Agatha Award winner and multiple award nominee for short fiction. No matter what you call her, she lives north of Boston with two daughters, two guinea pigs, and one husband.

The Dirt on Ninth Grave by Darynda Jones