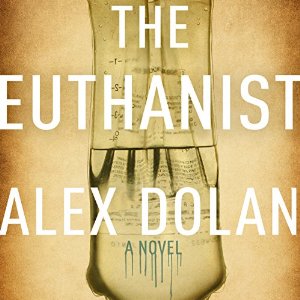 In this auspicious debut, Alex Dolan announces himself as a virtuoso of psychological suspense and a rightful heir to masters of the genre like Gillian Flynn and Megan Abbott.

A young woman helps to end the lives of people with terminal diseases, her reasons her own. When she helps the wrong person, she will be roped into a plot to gain vengeance on behalf of dozens. Her journey will make her question everything she ever thought she knew about herself. And the last life she ends may be her own.

They know her as Kali. She is there to see them off into the afterlife with kindness, with efficiency, and with two needles. She’s been a part of the right-to-die movement for years, an integral member, complicit in the deaths of 27 men and women, all suffering from terminal illnesses. And she just helped the wrong patient.

Leland Moon has been with the bureau for his entire career, but even as a respected agent, he was unable to keep his own son from being kidnapped on his way to school. When his boy finally came home, he told terrifying stories of his captors, and his nightmares haven’t stopped since. Moon draws Kali into his mission, a mesmerizing cat-and-mouse game with two ruthless predators – one behind bars, one free – who hold the secrets that could bring comfort to the families of their victims. This powerful journey toward grace and toward peace will force both Leland and Kali to question everything they believe to be true and just.

THE EUTHANIST is available from Amazon.

“Alex Dolan makes an engrossing debut with THE EUTHANIST. He writes a riveting and imaginative narrative as he deftly enhances a currently relevant plot with vivid characterization. Dolan hooks readers from the very start, ratcheting up the tension and suspense until the shocking ending. As a thriller writer, Alex Dolan is set to be one of the best.” —Fresh Fiction

“In one of the most promising debuts since Gillian Flynn’s Sharp Objects and Alice Blanchard’s Darkness Peering, The Euthanist strikes like a suckerpunch and never lets up. Seriously, this book is freakin’ relentless.” —Transgress Magazine/Ensuing Chapters

“Alex Dolan’s THE EUTHANIST grabbed me from the first page and showed no signs of letting go. Dark and sinewy, topical and timeless, laced with rich characterization and gallows humor, it showcases Dolan as a thriller writer to watch and follow.” —Louis Bayard, author of Roosevelt’s Beast, The Pale Blue Eye and Mr. Timothy

“Fast, fierce, complex and compassionate, THE EUTHANIST is an extraordinary performance from a writer full of both fire and heart.” —Scott O’Connor, author of Half World and Untouchable

“THE EUTHANIST grabs and doesn’t let go. But it’s much more than a brilliant debut thriller. Dolan’s mile-a-minute story also gets at one of our species most important issues—can we choose how to die? Forget that I couldn’t put it down; I couldn’t stop thinking about it after I did.” —Dylan Schaffer, author of Misdemeanor Man

“The biggest page turner of the year.” —LizLovesBooks

“Alex Dolan has written a superb first novel, meeting head-on two of the twin problems of present-day society…the reader is reduced to just having to read another chapter…….and another……. and the plot just keeps on getting thicker and thicker.” —Bestselling Crime Thrillers

“Reading Alex Dolan’s THE EUTHANIST is like cutting open a pearl; you negotiate through well crafted layers to get to the dirty little secret that put it all in motion.” —Robert Pobi, author of Bloodman and American Woman

“The heroine of Alex Dolan’s THE EUTHANIST is a sharp-tongued, take-no-prisoners kind of gal who had me gripped from page one. Dolan writes dialogue that’s snappy and darkly witty. Imaginative and riveting, The Euthanist is a one-of-kind novel that will leave readers staying up late and longing for more.” —Renee Swindle, author of A Pinch of Ooh La La

“Daring and original, Alex Dolan’s evocative prose takes you on a wild ride with an unforgettable (and literal) femme fatal. A lethal mix of beauty, physical prowess, compassion and a touch of freakiness, the character Kali stays with you long after you finish this compelling debut novel.” —Crash Barry, author of Marijuana Valley and Sex, Drugs and Blueberries

“In THE EUTHANIST Alex Dolan gives readers a tension-filled roller-coaster of a story with a compelling, complicated and feisty female lead. It’s a stylishly written tale that grabs you quick and keeps you reading. Rich, socially relevant and entertaining, it’s a vivid page-turner.” —Elaine Beale, author of Another Life Altogether

Alex Dolan is a writer and musician based in California. His first book, THE EUTHANIST, is published through Diversion Books and represented by the Sandra Dijkstra Literary Agency. His second book, THE EMPRESS OF TEMPERA, will also be published by Diversion Books.

In addition, Alex hosts the show “Thrill Seekers,” as part of the Authors on the Air Global Radio Network, where he interviews established and emerging thriller authors. He is an executive committee member of the San Francisco Bay Area’s Litquake festival, and a member of the International Thriller Writers and Sisters in Crime. He has recorded four music albums, and has a master’s degree in strategic communications from Columbia University.