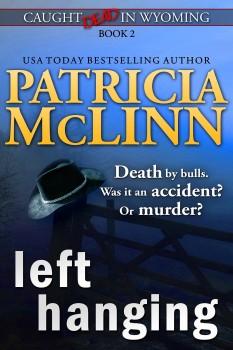 From the tip of the rodeo queen’s tiara, to “agricultural byproducts” ground into the arena dust, TV reporter Elizabeth “E.M.” Danniher receives a murderous introduction to the world of rodeo…

A Rodeo Producer, Dead in the Bull Pen. Accident or Murder? road in the night

Elizabeth, until recently a top-flight TV journalist on the national stage, has been making strides in getting her footing after a dizzying demotion to tiny—and entirely foreign to her—Sherman, Wyoming. But that equilibrium faces a major challenge.

The apparently accidental death—under the hooves of rodeo bulls— of a rodeo producer preparing for Sherman’s annual Fourth of July Rodeo catches the attention of Elizabeth and her KWMT-TV colleague Michael Paycik. Not only is it a major story about the region’s biggest event, but it’s being outrageously mishandled by the station’s egocentric anchor.

As Elizabeth and Michael start to dig, area rancher Thomas Burrell joins the investigation, providing background on the rodeo and suspects—and there are plenty because the victim had many enemies. But Tom has loyalties to some suspects as well as to the rodeo, so Elizabeth doubts his commitment to finding the truth no matter what. Not to mention that both Mike and Tom have indicated an interest in her . . . they might be okay with working together in a peculiar triangle, but the points of that triangle are starting to get under her skin.

LEFT HANGING is available from Amazon, Barnes & Noble and iTunes.

“I started laughing on the first page and continued laughing until the end.”

“The dialogue was so well written that I could easily imagine the innuendo, tone of voice and facial expression of each character.”