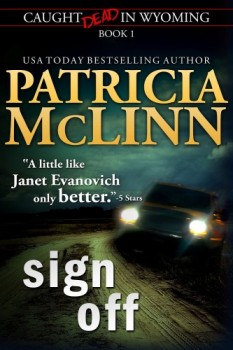 Divorce a husband, lose a career … grapple with a murder.

TV journalist Elizabeth “E. M.” Danniher will tell you she committed two sins — she didn’t stay young, and she made an enemy of a powerful news executive — her ex. She used to break national news. Now her top story as the “Helping Out!” reporter at dinky KWMT-TV in Sherman,Wyoming is getting a refund for a defective toaster.

Tough, funny and determined, Elizabeth wrestles with isolation, keeping a professional edge, and an evolving self-image. Is Wyoming — the land of cattle, cowboys, tumbleweeds, and fewer than six people per square mile — her new home or a road to permanent obscurity?

Soon she’s in a battle of wills with ex-football player turned journalist Mike Paycik, who sees her as a handy rung on his career ladder. And there’s the matter of a deputy sheriff—missing or murdered? Elizabeth finds herself investigating at the insistence of a girl who’s set on proving her father’s innocence. Not that enigmatic rancher Thomas David Burrell makes investigating easy.

But Elizabeth won’t fade to black without a fight, no matter how final some might want to make her SIGN OFF.

SIGN OFF is available from Amazon, Barnes & Noble and iTunes.

“This is one of those books that you want to stop everything to read while hoping it never ends.”