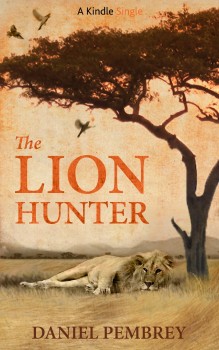 Andrew and Lavinia Riley are on their honeymoon at an African game lodge when they meet a Texan trophy hunter. Andrew, a journalist, senses a timely story about lion hunting, and engages a local guide to learn how the lions are tracked in this remote borderland of north Tanzania. Andrew finds lions, but his inquiries draw him into a different type of danger altogether – with local tribesmen. Soon, his only hope for survival lies in an unexpected source.

THE LION HUNTER is available from Amazon, Amazon UK and Goodreads.

‘The murder of the lion Cecil outraged people all over the world. Daniel’s reaction was to write this terrific story, with a totally unexpected twist. I read it in one sitting.’ John Rendall, animal conservationist and author of A Lion called Christian

Daniel Pembrey is the author of The Candidate: A Luxembourg Thriller. He is drawn to psychological suspense stories with a strong sense of location. His Amsterdam detective series, The Harbour Master, will be published by No Exit Press in 2016. When he is not writing, he loves to travel and meet interesting new people. To receive occasional email updates and free exclusive content, please sign up at www.danielpembrey.com. He is also on Twitter, @DPemb.

The Blissfully Dead by Louise Voss and Mark Edwards