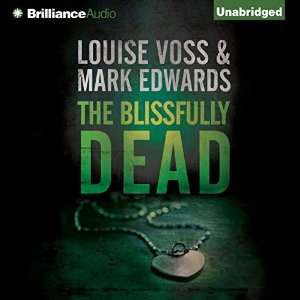 She couldn’t believe that he wanted to meet her. He was famous. She was a nobody. Finally, someone could see how special she was…

When the body of a teenage girl is found in a London hotel, DI Patrick Lennon is mystified. Nobody saw her or her killer enter the hotel, and there is no apparent motive—until a second teenager is found and Lennon realises somebody is targeting fans of the world’s biggest boy band.

As Lennon struggles with both his home life and his rivals on the force, the pressure to catch the killer before he strikes again reaches fever pitch. And when Lennon makes a terrible mistake that ends in disaster, he finds himself in a race to save not only the lives of more teenage girls but also his own career.

Exploring the darkest depths of the entertainment industry and the terrifying dangers of social media, The Blissfully Dead is a new masterclass in tension from the #1 bestselling authors of From the Cradle.

THE BLISSFULLY DEAD is available from Amazon.

‘An exciting, tense read.’ —Clare Mackintosh, author of I Let You Go

‘A tale of obsession, fame and the internet, The Blissfully Dead rips the gloss clean off Generation X Factor. Timely, chilling, creepy, great.’ —Simon Toyne, author of The Sanctus Trilogy

‘Modern, inventive, dark and twisted: a brilliantly characterised and astutely observed thriller about obsession, perception and crossing the line. The Blissfully Dead is another triumph from Voss and Edwards.’ —SJI Holliday, author of Black Wood

Mark Edwards and Louise Voss are the co-authors of psychological thrillers Killing Cupid and Forward Slash and two medical thrillers, Catch Your Death and All Fall Down, as well as From the Cradle, the first in the DI Patrick Lennon series.

They met in 1999 after Mark appeared on a BBC documentary about aspiring writers. They were the first British ‘indie’ writers to reach #1 on the Kindle chart and have sold over 650,000 books, including Mark’s solo novel, The Magpies.

Louise lives in Surrey with her daughter, and Mark lives in Wolverhampton with his wife and their children. Mark and Louise love hearing from readers and can be contacted on www.facebook.com/vossandedwards. They blog regularly on www.vossandedwards.com.