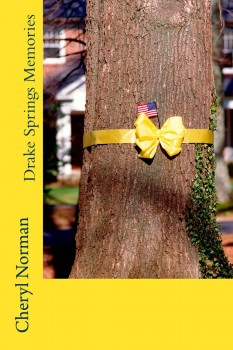 In Cari Mercer’s universe, the best-laid plans were not subject to change. She has her future mapped out with her fiancé Buzz Blanco. But US Army Private Blanco suffers an accident in jump school that leaves his body broken and his memory damaged. He’s forgotten their engagement, plans for the future, or even their romance. Cari’s future plans are put on hold indefinitely. As Buzz struggles to rehabilitate, he can’t recapture the memories that would restore the past five or six years. He feels like a seventeen-year-old in a twenty-three-year-old’s battered body. Military service and marriage hold no appeal for him, yet he’s committed to both.

Cari’s patience is tested, and her future with Buzz is in jeopardy until a tragic event brings them together in a new way. She learns life is an adventure, not a blueprint.

Cheryl Norman is a terrific romantic suspense writer whom sub-genre fans should keep an eye on as she is very talented.
~Harriett Klausner

DRAKE SPRINGS MEMORIES is available from Amazon and Smashwords.

Cheryl divides her time experimenting in the kitchen and spinning stories at her computer at her rural home in Florida. She also enjoys sewing and traveling with her husband.

Her mass market debut romantic suspense about the classic car industry, RESTORE MY HEART, earned her a mention in Publishers Weekly as one of ten new romance authors to watch. RUNNING SCARED scored a Perfect 10 with Romance Reviews Today. She recently moved from writing romantic suspense to sweet category romance, including the Drake Springs series.

The Last Victim by Jordan Dane