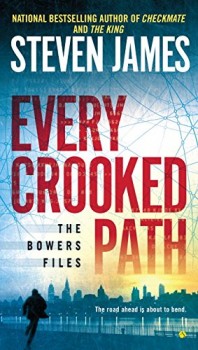 Last year, fans of Steven James’s Chess series saw the end of an era when he closed an eight-book story arc with Checkmate. Named a Suspense Magazine Best Book of 2014, Checkmate allowed FBI Special Agent Patrick Bowers to face a longtime nemesis and brought a satisfying conclusion to the series that began nearly a decade ago with The Pawn. James, who Publishers Weekly has called a “master storyteller at the peak of his game,” thought it was time, and he had no shortage of other projects, including his popular Jevin Banks series.

Readers wanted more of the FBI environmental criminologist who James once described as “cool under pressure, a little dark, a little haunted.” So did James’s publisher. And even as James said good-bye, he told The Big Thrill in 2014 that, “although I tapped out the bad guys for this cycle of books, I still have lots of ideas for cases that Agent Bowers could work on.”

So began EVERY CROOKED PATH, a prequel to the Chess series (actually, it covers the period after Opening Moves but before The Pawn). This time, Bowers is hunting the worst kind of monster—child sexual predators. As James explained, it’s “the story of how Patrick Bowers gets his start in New York City. It’s the first book in this prequel series and has one of his most complex plots of any of my novels. It’s a story about the lure of evil, obsession, courage, and the bounds of morality, all borne out in a taut, psychological thriller.”

Was he concerned about setting the story around catching child predators? “As a parent, it was both difficult and necessary for me to write this book. We can’t turn a blind eye to the world we live in. In my books I never celebrate evil, I never make it look glamorous or attractive. Instead, I try to give people a window to see the world more clearly, and a mirror so we also see ourselves in a new light.” James’s only concern was that people might assume the book contains objectionable material and be scared off. “It doesn’t,” James said. “The story is honest but not exploitative. Since I share with readers what is really going on, I think this is my most important novel yet.” Already opening to stellar reviews, EVERY CROOKED PATH promises to be another success for Bowers and his creator. 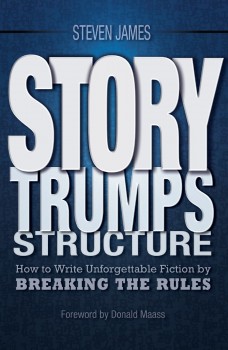 But success is nothing new to this author of more than 30 books. Beyond the Bowers and Banks series, James’s recent work includes Young Adult thrillers (the Blur Trilogy) and he’s a sought-after teacher and lecturer.

Writing for young people is both different and gratifying, he said. “My favorite fan letter to get from teens goes something like this, ‘I hate reading but I loved your book.’ I’ve gotten numerous letters like this. There’s too much pressure put on young adults to read and appreciate ‘literature.’ But let’s be honest, lots of the so-called classics suck. So lots of teens are being systematically taught to hate reading by being forced to read stuff they can’t connect with. I love to be a part of welcoming them back into the fold.”

When he’s not penning novels, James, who lives in Tennessee, is travelling the country—and world—teaching the art of fiction. Scan his Facebook page, and you’ll see photos of him teaching in Switzerland and Kazakhstan or speaking to writers from Appalachia to Alaska.

His book Story Trumps Structure is fast becoming one of the go-to sources for aspiring scribes. A core premise of the book is that the conventional “rules” of writing can sometimes “constrict rather than inspire.” James, the rare author who holds a Master’s degree in storytelling, advocates some unconventional advice, such as “quit your writers’ group,” “throw out your outline,” and “stop trying to write in three acts.” He believes in writing “organically”—letting the story take its natural path.

One benefit is that he’s often surprising himself. “When I was writing EVERY CROOKED PATH, I didn’t know how it would end and because of that, I think the twists in the story are even more satisfying.”

If history is a guide, the novel will more than satisfy. And hopefully it will be the beginning of another decade of thrills for the many fans of Patrick Bowers and Steven James. Until then, look for Curse, the third installment in his YA trilogy, and some international espionage with our friend Bowers. 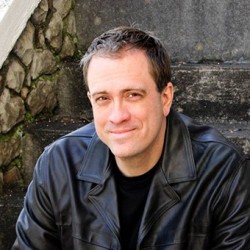 Steven James is a national bestselling novelist whose award-winning, pulse-pounding novels continue to gain wide critical acclaim and a growing fan base.

Suspense Magazine, which named James’s book The Bishop its Book of the Year, says that he “sets the new standard in suspense writing.” Publishers Weekly calls him a “master storyteller at the peak of his game.” And RT Book Reviews promises “the nail-biting suspense will rivet you.”

With a Master’s degree in Storytelling, James has taught writing and storytelling around the world and is one of the few Master CraftFest instructors at ThrillerFest, North America’s premier training event for suspense writers.

Respected by some of the top crime writers in the world, James deftly weaves intense stories of psychological suspense with deep philosophical insights. As Christy Award-Winning novelist Ann Tatlock put it, “Steven James gives us a captivating look at the fine line between good and evil in the human heart.”