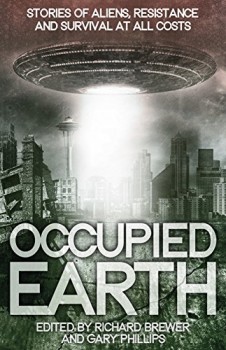 In H. G. Wells’ classic book The War of the Worlds, the Earth, invaded by Martians, is on the brink of annihilation, only to be saved at the last moment by pesky germs that we human had long gotten used to. Wells’ story has fascinated the public since its first publication in 1898 and over the decades variations of this tale have been told via radio, feature films, comics books, and television.

In the 1950s, fueled by Cold War paranoia, books like the Puppet Masters, Invasion of the Body Snatchers, and the short story Who Goes There, portend the invaders invading our bodies and taking us over from within or replacing us by mimicking our form.  Philip K. Dick’s various scenarios had us questioned our very identities, perhaps even tampered with them in such short stories as “We Can Remember It for You Wholesale.” Or maybe, unknown to us, we were the pretend humans we chased, the replicants in Do Androids Dream of Electric Sheep, his noir-ish futuristic cop story.  And PKD also envisioned a conquered America, where the Axis won the war in The Man in the High Castle.

So what if they, the ones from out there, weren’t defeated by evolution or our collective fight like in Independence Day?  What if the aliens have been watching us for some time, but had also infiltrated us by surgically altering themselves to look human and burying sleepers among us who become a part of our society for years?  What if with their acquired intel and a superior military force they not only attack us, but win? Earth becomes a militarily strategic outpost for these invaders.  What would become of us then?

The new anthology OCCUPIED EARTH explores the idea of what the world would be like some twenty years on after being conquered–think Vichy France or Stalinist Russia writ large. Yet, despite the totalitarian regime and the shortages of basic necessities, it’s a world where the trains run, hospitals, schools, and factories function, there are still cops and robbers, a black market, even a resistance in the form of the Red Spear, but all under the unforgiving black-eyed gaze of the Mahk-Ra.

My co-editor Richard J. Brewer and I are crime fiction writers with a love for sci-fi.  It was no coincidence then that we reached out to other writers in the field like Rachel Howzell Hall, Rob Hart, and Matthew Clemens.  The shared world stories in the all-original collection show humans surviving as best they can under an oppressive situation.  Cynical EMTs in “Do No Harm” doing the right thing at the risk of their freedom; in “Hope” a human and alien cop partnership where the Earthman does his job, but hasn’t thrown away his humanity, and in “Traitor” even a collaborator who has enjoyed the spoils of her heinous actions, having turned her back on humanity, finds that when it comes to family, those are ties you can’t jettison.

As Richard noted, “The great thing about building the OE world, especially with the contributors to this in the book, has been to watch how these writers took the framework we gave them and helped us add the bricks and mortar to make a full structure, to guide that construction. To build, and continue to build, that world, that universe, piece by piece has proved to be both creatively challenging and exciting.  Every story brings a new piece to the OE world and with luck it’s a world that Gary and I will continue to explore and expand for some time to come.”

OCCUPIED EARTH is out now from Polis Books in tradepaper in bookstores, and on CDs and downloadable audio from Tantor.  On OccupiedEarth.com you can read bonus track short stories not found in the published volume.

Richard J. Brewer’s most recent short story, Last to Die, was included in another anthology inspired by The Boss, Trouble in the Heartland, and was noted as one of the Distinguished Mystery Stories of the year in The Best American Mystery Stories 2015.

Gary Phillips’ other recent work is Beat, Slay, Love: One Chef’s Hunger for Delicious Revenge.  It is a round robin novel he helped write that is a dark comedy sendup of foddie mysteries and so-called Chick Lit.