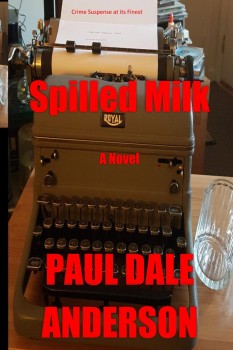 Yesterday Twin Rivers was the safest of all Chicago suburbs. Today it is the most dangerous. Four years ago Megan Williams was raped. Today she is a serial killer who castrates her victims before letting them bleed out. Police haven’t found the four men who raped and mutilated Megan’s body with hunting knives, and they aren’t even looking anymore. There are too many other rapes and murders to investigate. Only Megan’s sister, Susan, and 70-year-old investigative reporter Rodney Engleworth appear concerned the rapists are still raping and killing. When Rod falls victim to Megan, Gazette publisher Tim Goodman joins forces with Detective Sergeant Joel Giffords and police public information officer Elsie Dorr to track down Megan and the rapists before Susan falls victim to the rapists and Megan can kill again.

SPILLED MILK is available from Amazon.

Paul Dale Anderson has written more than 27 novels and hundreds of short stories, mostly in the suspense, horror, fantasy, and science fiction genres. Paul has also written contemporary romances, mysteries, and westerns. Paul is an Active Member of SFWA, HWA, and Authors Guild, and he was elected Vice President and Trustee of Horror Writers Association in 1987. He is a current member of International Thriller Writers and a former Active Member of MWA. Paul lives in Rockford, Illinois, with three cats and thousands of books.

Paul has taught creative writing at the University of Illinois at Chicago and for Writers Digest School. He has appeared on panels at Chicon4 and Chicon7, X-Con, WindyCon, Madcon, Minncon, the World Horror Convention, and the World Fantasy Convention. Paul was a guest of honor at Horror Fest in Estes Park, Colorado, in 1989. He is currently the chair of the 2015 HWA Stoker Awards Long Fiction Jury.