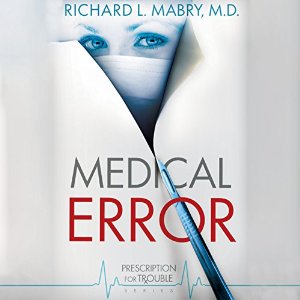 Dr. Anna McIntyre’s life was going along just fine until someone else began living it. In a single day, she finds herself suspected of a felony, about to be suspended from her position at the medical school, and likely to be the target of a malpractice suit. Could it get worse? She finds that it can, and it does.

“In Mabry’s second Prescription for Trouble book, the fast-paced action will keep readers on the edge of their seats. Mabry’s medical expertise adds to the climactic ending.” (Four and a half stars) ~Romantic Times Book Reviews

“This follow-up to Code Blue will appeal to CF suspense fans who enjoy lots of plot twists and a fast pace.”~Library Journal

MEDICAL ERROR is available from Audible.

Richard Mabry is a retired physician, author of “medical suspense with heart.” His novels have been a semifinalist for International Thriller Writers’ debut novel, finalists for the ACFW Carol Award, Inspirational Reader’s Choice, and Romantic Times’ Reader’s Choice Award, as well as winner of the Selah Award. He is the author of nine published novels (the latest being Miracle Drug), and one novella (Rx Murder).