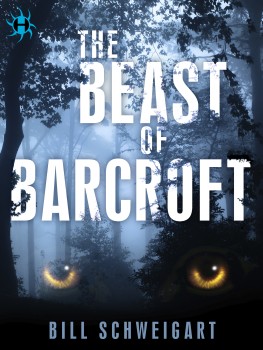 In his newest novel, THE BEAST OF BARCROFT, author Bill Schweigart brings readers a true tale of terror.

Ben McKelvie believes he’s moving up in the world when he and his fiancée buy a house in the cushy Washington, D.C., suburb of Barcroft. Instead, he’s moving down—way down—thanks to Madeleine Roux, the crazy neighbor whose vermin-infested property is a permanent eyesore and looming hazard to public health. First, Ben’s fiancée leaves him; then, his dog dies, apparently killed by a predator drawn into Barcroft by Madeleine’s noxious menagerie. But this killer is something that couldn’t possibly exist—in this world.

With some grudging assistance from a curator at the Smithsonian’s National Zoo and the crackpot theories of a self-styled cryptozoologist, Ben discovers the sinister truth behind the devilish creature now stalking the locals—but knowing the beast of Barcroft and stopping it are two very different animals.

The Big Thrill recently caught up with Schweigart to learn more about this chilling new story.

Tell us a little about THE BEAST OF BARCROFT. Based on the description, it feels like it has a supernatural vibe. What most interested you in writing a story with this theme?

You are correct—there is a supernatural vibe to it, but the novel takes place in a very grounded setting. In THE BEAST OF BARCROFT, something is stalking the residents of Arlington, VA. When Ben McKelvie survives an attack in his own backyard by an animal that has no business being in Arlington, no one believes him. But when neighbors begin turning up dead, Lindsay Clark, a curator from the Smithsonian’s National Zoo is brought in. Ben soon convinces Lindsay that there may be more to this creature than meets the eye, and with the wild theories of a wealthy cryptozoologist, they discover the truth about the Beast of Barcroft.

The story grew very organically. I love the network of trails in Arlington and I’ve always wanted to set something there. It’s this secret circulatory system right under everyone’s noses, in the shadow of Washington DC, weaving between the neighborhoods. Then two things happened in quick succession a few years ago: my father passed away and I read an article on the history of the area, and there was a blurb about the actual Beast of Barcroft. Forty years ago, something actually terrorized the neighborhood. Cats and dogs were killed, wild screeching filled the night, and the local media ran stories like: “What is it that screams so in the dark hollow of Four Mile Run?” In the end, a civet was captured and took the blame. The blurb was only a couple of sentences long, but it was the lightning bolt that brought everything to life for me. In my version of events though, I move the action to the present day and my beast is considerably more terrifying than a civet.

Where you a fan of horror and creepy fiction growing up?  What were some of your influences?

I love a good scary story. I’ve read quite a bit of Stephen King and I’m a massive comic book fan, but I’ve always been fascinated by cryptozoology. Things like the Loch Ness Monster and Bigfoot. I’ve always loved the idea of something wondrous and undiscovered lurking just beyond the tree line. With THE BEAST OF BARCROFT, I suppose I just wanted to give my neighborhood its own fictional bogeyman.

What do you hope people will take away from this story when they’re finished?

I hope people will love Ben and Lindsay as much as I do. I love great partnerships in fiction—Holmes and Watson, Woodrow Call and Gus McCrae, Lisbeth Salander and Mikael Blomkvist. The idea of two very different people casting their lot with one another. Romance would have been the easier route for Ben and Lindsay, but it’s those unlikely partnerships that always resonated with me. Their relationship is far more important to me than the beast. THE BEAST OF BARCROFT is horror, but it’s horror with heart. And quite a bit of humor, too.

Northwoods, the sequel to THE BEAST OF BARCROFT, will be available in February 2016. While my agent was looking for a publisher for Beast, I was busy writing its sequel, so readers can get a quick one-two punch if they like: THE BEAST OF BARCROFT in November, Northwoods in February. At the moment, I’m working on the third book in the series and I’m having a blast torturing these characters I love so much. 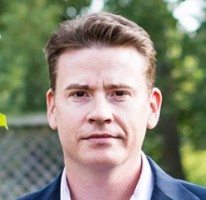 Bill Schweigart is the author of Slipping the Cable. He lives in Arlington, Virginia, with his wife and daughter, who provide him with all the adventure he needs.