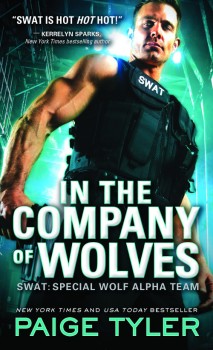 When a new gang of criminals comes to town, Dallas S.W.A.T. team member Eric Becker immediately senses werewolves—a lot of them. Turns out, the new bad guys are a pack of wolf shifters. While stopping a crime in progress, Becker comes face-to-face with the most gorgeous woman he’s ever seen. So, he does the logical thing—he hides her and leaves the scene with the rest of his team. But with a street-savvy thief named Jayna on his hands, along with Eastern European mobsters bent on making Dallas their new home, Becker’s life is about to be turned upside down.

The Big Thrill caught up New York Times and USA Today bestselling author Paige Tylor to talk about the latest in her S.W.A.T. series, IN THE COMPANY OF WOLVES.

This is the third book in your S.W.A.T. series. Are Eric or Jayna characters that fans will recognize from previous books?

Fans will definitely recognize Eric. By the way, he prefers to go by Becker (his last name). He’s one of the youngest werewolves in the S.W.A.T. pack and is typically really laid back. You can usually find him hanging out with fellow werewolf/S.W.A.T. officer Landry Cooper (who also prefers to go by his last name.)

Jayna Winston will be new to the fans. She’s the woman Becker runs into during a crime in progress. She’s The One who rocks his world and gets him out of his laid-back mode. Jayna comes with a bit of baggage, and some responsibilities that make a relationship between her and Becker extremely interesting.

For readers who are new to the S.W.A.T. world, tell us a little about it. Are shifters known or unknown to humans? What makes the world unique?

Wow, I could seriously write a novella on the werewolf mythologies involved in my S.W.A.T. series. I decided right from the start that I wanted to completely re-envision the werewolves and that’s what I did.

These shifters aren’t known to the rest of the human world, at least not to everyone. My series revolves around the Dallas S.W.A.T. team, and the werewolves use their abilities to protect and serve. From the name, you can obviously also tell that they’re all alphas—got to have that sexy alpha-male thing going on! Just as obvious, I couldn’t work with the traditional werewolf that only showed up during the full moon because that would be a rather extreme limitation to doing their jobs. I also didn’t want the typical “cursed” werewolf or the out-of-control “monster” (aka: American Werewolf in London style.) These guys had to be hunky, sexy, and just as importantly, able to do their jobs as cops.

Yet, at the same time, I wanted these guys to be a little rough around the edges with a bit of danger to them. I also wanted them to be a diverse group, with some having abilities that the others haven’t mastered. Finally, I knew I had to have more complex mythology, so some of the werewolves you meet in each new book might be completely different than the ones you met in the first part of the series.

As for what makes my werewolves unique, they’re essentially born, not made. Getting bitten or scratched by another werewolf won’t turn a regular human into one. They have what I think of as a recessive gene that lies dormant inside them, only turning on when the person goes through an adrenaline-pumping, life-or-death situation. Something about the physiology of almost dying allows the gene to do its work, and that person becomes a werewolf.

When they become werewolves, they pick up several basic characteristics like the typical werewolf claws and fangs, great vision and sense of smell, strength, speed, and aggressive tendencies running the gamut from a little to a lot. For some, that’s as far as they’ll ever get. They’re people with some werewolf capabilities. But for others, there’s the possibility of being able to shift fully into their true wolf form. I loved the idea of being able to write about werewolves in all their possible forms. I think it keeps the stories fresh.

And just when you think you have all the rules down and really understand the Paige Tyler werewolf world, there’s one more little tidbit of information for you. A werewolf isn’t necessarily locked into one hierarchical category or another. There are rumors out there that any werewolf can go a little omega if they don’t socialize with other werewolves early enough in their development, or if something really bad happens to them. Betas aren’t stuck in their roles, either. There are folktales of betas turning alpha when their packs are threatened. I can’t really say if it’s true or not, but if this series has taught me anything, it’s that anything is possible.

Oh yeah, one last little thing you need to know to really understand where these stories are going to take you. Each werewolf (alpha, beta, or omega) only has one shot at true love called The One, that one in a billion person whom they’re meant to be with. When a werewolf meets The One for him or her, no other rules apply and nothing will stop them from being together. Not common sense, not the law, not even the Pack. It’s a force that’s stronger even, than the werewolves themselves.

What’s the most interesting thing you discovered in researching this book, whether or not it made it onto the page?

I have a Google alert set up for “S.W.A.T.” It lets me know whenever the term shows up in the news. I never realized how often S.W.A.T. teams get called out. It’s definitely dangerous—not a job I’d want!

How did you do your research for Dallas S.W.A.T.? Do you have friends or relatives who are officers?

My husband is retired army and has worked with a lot of different police officers, Secret Service, ATF, etc. I lean on him to give me the flavor for the law enforcement interaction, not from a Law and Order procedural point of view, but just from “how do they see things.”

I also learned a lot from the website for an old TV show called Dallas S.W.A.T. It gave me a lot of info, like the number of team members, ranks, specialties, etc.

Are there a fixed number of books in this series, or is it more open ended?

The basic series is sixteen books, one for each member of the original S.W.A.T. pack. I have the entire series outlined already with details on whom each werewolf is going to end up with and how everything all ties together throughout the series. I also have a few spin-off ideas in mind!

Whose story will be told next, or what adventures are you planning for the S.W.A.T. team?

The S.W.A.T. pack is going to find out that the werewolf world is a lot different than they ever knew, and it’s going to get even scarier the more they learn. As far as which book comes next, that’s a secret! However, I will tell you that if you read each of the first two books very carefully, they give readers clues to figure out which hero is next. If you look closely at Becker’s story, you’ll be able to figure out who the hero in Book Four (To Love a Wolf) is!

Christmas is right around the corner. What would Eric and Jayna give each other for Christmas and would it be the gift they wanted?

Well, for those of you who have read IN THE COMPANY OF WOLVES, you’ll remember that Becker’s motorcycle sort of got crushed. I think Jayna and her pack might do something about that for Christmas. And Becker learned that Jayna always wanted a dog, so I think Becker is going to visit a local animal shelter to find her a Christmas present.

What would be something fun they might do on a cold winter evening?

Becker and Jayna and her whole beta pack are going to start a brand new Christmas tradition. They’re going to spend the entire day and most of the night lying around their loft together watching Christmas movies.

Sounds like an intense book that thriller readers are going to want to pick up. Thanks for stopping by The Big Thrill.

Paige Tyler is the New York Times and USA Today bestselling author of sexy, romantic fiction. She and her very own military hero (also known as her husband) live on the beautiful Florida coast with their adorable fur baby (also known as their dog). Paige graduated with a degree in education, but decided to pursue her passion and write books about hunky alpha males and the kickbutt heroines who fall in love with them.