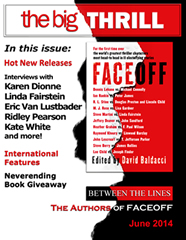 Read the stories that were featured in the June edition of The Big Thrill.

33 new thrillers to kick start summer, including debut novels from Kym Brunner, Susan Israel, Tom Wither, Graeme Shimmin and Erica Wright, plus a Between the Lines Interview with the authors of FACEOFF, ITW’s one-of-a-kind anthology pulling together the most beloved characters from the best and most popular thriller series today.

Eric J. Guignard’s AFTER DEATH… was awarded the Bram Stoker Award for Superior Achievement In an Anthology by the Horror Writers Association.

L.A. Starks’ STRIKE PRICE has been named 2014 Best Mystery/Thriller by the Texas Association of Authors.

Leslie Budewitz’s DEATH AL DENTE is the recipient of the Agatha Award for Best First Novel, presented by Malice Domestic.

S.D. Skye, author of SON OF A ITCH, won the 2014 Next Generation Indie Book Award in the  Multicultural Fiction category, offered by the Independent Book Publishing Professionals Group.

Whether you’re a fan or an author, you’ll want to join the Thriller Roundtable discussions at the Big Thrill website, where each week a new group of authors discuss everything from what they love about writing thrillers, to what they’ve learned, and more.

Here’s what’s in store for June:

June 2 – 8: Are thriller writers particularly pressured to write too fast?
June 9 – 15: Are thriller writers biased? Or do some of us go too far in trying to beat down stereotypes?
June 16 – 22: How has an editor’s advice helped with your story?
June 23 – 29: How do your reading and writing habits change in the summer?

Congratulations to Michael Rainwater, the winner of this month’s Big Thrill giveaway. Michael will receive an assortment of signed thrillers including Stalk Me by Richard Parker, No Stone Unturned by James W. Ziskin, Over My Live Body by Susan Israel, Terminal Life by Richard Torregrossa, Sniper a Thriller by Vaughn C. Hardacker, Limestone Gumption by Bryan E. Robinson, Ancient Enemy by Michael McBride, Metamorph by Stephen M. DeBock, Robert Ludlum’s ™ The Bourne Ascendancy by Eric Van Lustbader, Deeper Than Need by Shiloh Walker, Ash and Bone by Lisa Von Biela and The Blood of Alexander by Tom Wilde.

The Last Heir by Chuck Greaves