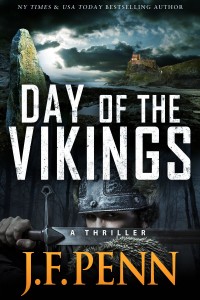 A ritual murder on a remote island under the shifting skies of the aurora borealis.A staff of power that can summon Ragnarok, the Viking apocalypse.When Neo-Viking terrorists invade the British Museum in London to reclaim the staff of Skara Brae, ARKANE agent Dr. Morgan Sierra is trapped in the building along with hostages under mortal threat.As the slaughter begins, Morgan works alongside psychic Blake Daniel to discern the past of the staff, dating back to islands invaded by the Vikings generations ago.Can Morgan and Blake uncover the truth before Ragnarok is unleashed, consuming all in its wake?Day of the Vikings is a fast-paced, action adventure thriller set in the British Museum, the British Library and the islands of Orkney, Lindisfarne and Iona. Set in the present day, it resonates with the history and myth of the Vikings.

DAY OF THE VIKINGS is available from Amazon, Barnes & Noble and Kobo.

New York Times and USA Today Bestselling Author of Thrillers on the EdgeOxford educated, British born J.F.Penn has traveled the world in her study of religion and psychology. She brings these obsessions as well as a love for thrillers and an interest in the supernatural to her writing.Her fast-paced ARKANE thrillers weave together historical artifacts, secret societies, global locations, violence, a kick-ass protagonist and a hint of the supernatural.