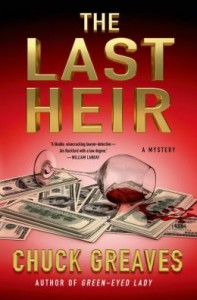 Chuck Greaves’s THE LAST HEIR is the third installment in his award-winning mystery series featuring trial lawyer Jack MacTaggart, who has been described as an attorney with the talents and ethics of Clarence Darrow combined with the charm and mischief of Jack Sparrow.

Philippe Giroux, estimable patriarch of the Chateau Giroux wine empire, has tragically lost a son. Or has he? Once confirmed by the court, Alain Giroux’s death will pave the way for his brother Phil to inherit America’s most storied winery. Or will it? Andy Clarkson, Alain’s boyhood chum, covets the Chateau Giroux vineyard acreage for his neighboring golf resort. Or does he? Claudia Giroux, Philippe’s hauntingly beautiful daughter, has proof that Alain’s death may not have been all that it seems. Or does she?

As the scions of a privileged California wine dynasty grapple for control of their family’s legacy, MacTaggart is caught in a cross-fire of estrangement, betrayal, and murder. To complicate matters, MacTaggart is being shadowed by film star Ethan Scott, who hopes to spin the dross of a family’s private travails into box office gold.

Amid the stately oaks and sylvan vineyards of California’s fabled Napa Valley, MacTaggart and his colleagues Marta “Mayday” Suarez and Regan Fife learn the hard way that while blood may be thicker than water, money is a powerful anticoagulant. As the long-buried secrets of a troubled family are finally revealed, only one question remains to be answered: Who will survive to become The Last Heir?

After twenty-five years as a trial lawyer in Los Angeles, Chuck decided to pursue a writing career. His 2012 debut novel, HUSH MONEY, the first in the Jack MacTaggart series, won the SouthWest Writers’ International Writing Contest and was a finalist for, among other honors, the Shamus, Rocky, Reviewer’s Choice, and Audie Awards. The Los Angeles Times called Chuck’s second novel, HARD TWISTED, a work of literary fiction based on a Depression-era true crime, “a gritty, gripping read, and one that begs to be put on film.” In 2013, Jack MacTaggart returned in THE GREEN-EYED LADY, which #1 New York Times bestselling author Douglas Preston called “the wickedest read of the year.”

Chuck is currently at work on his next historical novel. He’s kindly agreed to answer some questions:

THE LAST HEIR is centered around a Napa Valley winery. I’ve heard that you have a winery of your own. How did that come about?

What I have is a small vineyard—just five acres of viognier and pinot noir grapes—in which I can be found most afternoons after mornings spent wrestling with my current work-in-progress. Its function is primarily therapeutic. But my love of wine goes back many years, and I’ve been a collector and general aficionado ever since I returned to California from law school in Boston in the early 1980s.

A recurring motif of the MacTaggart series involves plopping Jack—who’s a lunch pail kind of guy—among the tea party set and letting him rattle the china. I thought that a Napa Valley winery would make a perfect setting for that sort of frisson. I also liked the idea of an outwardly happy, successful wine family that’s actually riven by inter-generational jealousy and dysfunction leading, naturally, to murder, with each family member trying to manipulate Jack – this blue-collar outsider – in order to advance his or her agenda. Publishers Weekly calls it “intrigue-laden,” which I think is a good descriptor. And of course, it was an opportunity to write about a subject (wine, not family dysfunction) with which I’m both interested and familiar.

Most new authors write, in the hope of being published, while still hanging onto their day jobs so they can eat. You, on the other hand, up and left a successful law practice to “see if you could write.” Weren’t you terrified?

There were times when I doubted the wisdom of the decision, let’s put it that way. I resigned my law firm partnership in early 2006, and by 2009 I’d written two complete novels—HUSH MONEY and HARD TWISTED—but still had no agent or publisher. What I always had, though, was faith in the material. So I entered both manuscripts in a blind-judged writing contest and, out of over 680 entrants, took first and second place overall. That led to multiple agent offers and, shortly thereafter, contracts with both St. Martin’s and Bloomsbury. All of that—the contest win, the agent, and the contracts—happened over the space of a few short months in late 2010, and came as a big relief.

I’d actually tried writing while still in practice, but found that I couldn’t maintain the required continuity, so once I committed to becoming a novelist, I really had no choice but to jump in with both feet. Although I wouldn’t recommend it to everyone, there’s a definite upside to burning your boats in the harbor. Failure ceases to be an option.

All of that said, I have nothing but respect for those writers who work a full-time job, or parent on a full-time basis, and still find the time to write every day. They’re the real role models in this business.

To what extent does your former law practice find its way into your novels?

Mostly in cameos. For example, the opening sequence in THE LAST HEIR is loosely based on a real case that I handled, in which a very prominent citizen in Los Angeles died and left not one but two sets of wives and children. Marvin Mitchelson, the noted (and somewhat notorious) family lawyer, represented “wife” number two in what’s called a Marvin action, which is a kind of quasi-contractual claim that he pioneered. Let’s just say the case didn’t end well for his client.

While I wasn’t a criminal lawyer, I did handle a broad range of civil litigation for some very interesting people. Richard Pryor, for example, was a client for many years. I think I’ve got enough stockpiled material to last the rest of my writing life.

Legal thrillers or historical novels? Does your writing process for them differ? How? Do you enjoy one over the other?

Both, I hope. The MacTaggart novels are great fun to write and, I hope, to read, and come straight from my imagination to the printed page. A book like HARD TWISTED involves a different process altogether. I spent over ten years doing the research, and the writing style—spare, allegorical—required a great deal of effort. Honestly, the book took a lot out of me, which made the end product all the more satisfying. Comparing the two is like comparing a tasty comfort food, like pizza, with a multi-course, gourmet meal. Both satisfy, but on fundamentally different levels.

A few words about your next historical?

I’m very excited about it. The working title is TOM & CHARLIE. It’s set in the hangover years after the Roaring Twenties in New York, when Lucky Luciano was the most powerful gangster in America. Thomas Dewey was an ambitious young prosecutor charged with taking him down, and Cokey Flo Brown—grifter, drug addict, and prostitute—was the witness who claimed she could do it. Only George Morton Levy, a canny Long Island defense lawyer, stood between Lucky and a life behind bars. The book is their story, beginning in 1915 and building to Luciano’s notorious 1936 vice trial.

Best of all, the book has an intriguing backstory. Some years ago, I met Levy’s daughter, who became a good friend. One day she casually mentioned that when her father died in the 1970s, she moved all of his old case files to a barn in upstate New York, where they remain to this day. I asked if I could fly out and take a look. Sure enough, I found George Morton Levy’s original file from the Luciano trial, complete with hundreds of pages of never-before-seen material. It’s been a ton of work to write, but I think it’s a wonderful story with real historical significance. Look for it in the fall of 2015. 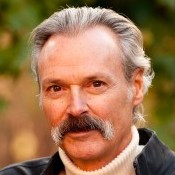 Chuck Greaves spent 25 years as an L.A. trial lawyer before turning his talents to fiction, and his Jack MacTaggart series of legal mysteries has already been a finalist for numerous national honors including the Shamus, Audie, Rocky, and Reviewers’ Choice Awards.