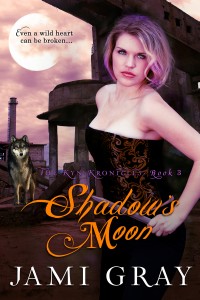 Jami Gray, author of SHADOW’S MOON, recently answered some questions for the BIG THRILL regarding her latest release.

Well, if you’ve read my bio, you know I come from a huge family, 37 strong. It’s not a joke, promise. It’s very real. Here’s the fun part—I am the least social person you’ll probably ever meet. No, really. In real life, where people come up and hold actual conversations, I have to rely on my husband for support. I’m pretty shy until the ice gets broken. Then, woo baby, I’m right in there.

I’ve been blessed with two boys because someone up there knows I’d never survive raising girls. I have nothing but admiration for those who have accepted that challenge. My boys are two of the greatest things I’ve ever done, well, next to marrying my best friend. So yes, I’m very outnumbered in my home, but they’ll tell you it feels the other way around.

I sport a type-A personality, even managed to get a Master’s in Organizational Management. Yep, it’s a real degree. That’s the degree the person who comes into a company, looks at it, and says, “You know, guys, you’re going about this all wrong. Here’s what you need to do…”

However, no matter how much in order the rest of my life must be, I’m a closet plotter when it comes to writing. When I first started out, I would loudly and proudly proclaim I wrote by the seat of my pants. Five books later, I humbly bow before the wisdom of those who shook their heads and tsk-tsk-ed my proclamations. While I detest outlines (evil reminders of all my college research papers and journalism assignments), I’ve found them necessary to ensure my stories come together without massive reconstructive surgery.

Strangely enough, nope. Initially I wanted to be a judge, but when I learned how long law school would be I moved on. Next up was veterinarian, but the first time I helped set a dog’s hind leg, I figured out that was not an option. Then it was on to theater, but that would require moving to New York and I’m not that kind of girl.

I hit on writing after being adopted at the age of fourteen, when my state-mandated therapist suggested I keep a journal. Funny thing, it got boring so instead I started creating stories and characters that were much more interesting than reality at the time. I started writing fiction in earnest as a freshman in high school. Back in the dark ages, typing on an actual typewriter was a required class. My parents had invested in an electric typewriter so the six of us in high school could practice our typing skills. Needless to say, I would hover over siblings until they finished then I would commandeer the typewriter for my own nefarious purposes. By the time I began to pack for college at eighteen, I had almost two hundred pages of YA fantasy novel done. And no, it will never, ever, see the light of day again. After that, writing was something I had to do.

How are your story ideas born?

I wish I could share some profound inspiration, but yeah…no. I always knew magic would be a key component of my world-crafting, along with one or two murders or devious plots.

I picked Urban Fantasy and Paranormal Suspense because one of the greatest mind benders for me has always been how would our world react to the existence of magic or humans with a little bit “more” to their genetic make-up?

For my Urban Fantasy series, it came down to how well could the everyday populace handle the reality of werewolves, vamps, necromancers, demons, witches, and every other story ever told? And because life has a darker side and the Grimm Brothers never met Walt Disney, what would those in power do to harness such abilities for their own advantages?

This meant my main characters in my Kyn Kronicles series had to be intimately acquainted with the pros and cons of the reality of magic. In SHADOW’S MOON the looming threat is what happens when the humans find out they’re real? Who becomes the real monster?

In my newest Paranormal Romantic Suspense series, PSY-IV Teams, I set magic aside and delve into a unique group of ex-military who possess psychic abilities, and how they use these talents to hold back the tide of global threats from what they hold most dear.

I was adopted at 14, so I find my main characters tend to come with some baggage. Since I firmly believe that you have two choices when life starts putting you through the wringer, stand up or fall down, my women (and men) tend to stand up, even if they’re weaving on their feet, faces bruised and battered, they’re up, so bring it.

What’s the best thing about being an author? Worst thing?

I’ll answer worst thing first, because it’s easier for me. The worst thing about being a writer—finally getting a solution to that scene/character or motivation/plot line you’ve been hung up on forever while you’re in the shower—with shampoo in your hair and knowing you have to jump out and write it down before you forget it. This happens more than you want to know.

Best thing—readers who take time out of their lives to pick up your stories, fall in love with them, and then actually share that experience with you. Writing is a solo endeavor, so when a reader tells me how much he or she enjoyed a story, it will make my entire week!

HUNTED BY THE PAST, the first in my newest series, PSY-IV Teams, is out in July 2014. I just sent in the fourth book of the Kyn Kronicles, SHADOW’S CURSE, into my editor for a fall release. Since I’ve spent two and half years writing back-to-back books, I’m taking June off to do some research before I start the second book in PSY-IV Teams in July. Here’s hoping I can maintain a two-book release schedule for the next couple of years!

Jami Gray is the award winning, multi-published author of the Urban Fantasy series, The Kyn Kronicles, and the Paranormal Romantic Suspense series, PSY-IV Teams. Her latest release, SHADOW’S MOON (5/14) was a Golden Claddaugh Finalist, and the first in her newest series, HUNTED BY THE PAST, hits shelves in July 2014. She is surrounded by Star Wars obsessed males and a male lab, who masquerades as a floor rug as she plays with the voices in her head.

To learn more about Jami, please visit her website.